Trending
You are at:Home»Africa»Attending the Goat Races in Dar es Salaam
By Mandi Schmitt on September 19, 2015 Africa, Tanzania

One of the best parts of traveling abroad is the chance to become part of a different culture and to participate in activities that don’t exist in your home country.

Little did I know that this meant attending the annual goat races in Dar es Salaam. Though it’s not exactly a traditional function attended by locals, there are still traces of Tanzanian culture associated with the festivities, just infused with western concepts. Apparently it’s one of the main social events of the year for expats and travelers, and one that absolutely shouldn’t be missed. The theme of this year’s race was The Great Goatsby, compelling many attendees to don 20’s style outfits. Here’s my experience with the goat race: 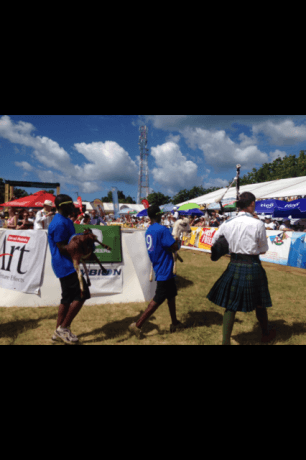 The event takes place in the beginning of June, which is winter time in Tanzania, meaning slightly cooler temperatures. It cost 10,000 shillings to enter, around $6, and a significant amount of all proceeds goes to local charities like Help2kids. Once inside, there are numerous food stands offering Thai, local BBQ chicken, pizza, and burgers surround the track, along with beer, wine and liquor tents.

The oval track is in the middle of the gated area and races occurred every 30 minutes or so. Before each race commenced, you could place 2,500 shilling bets on which goat you thought would win. Winners received 6,000 shillings, enough for two beers! While everyone cast their final bets, the goats were paraded around the track, led interestingly enough by a kilt wearing bagpipe player, and then lined up at the start line. As you can imagine, goats aren’t the most competitive bunch, and ran simply because the others were running. They circled around the track twice, and basically whoever happened to be at the front of the pack at that time won the race. It was way more comical to watch than the cut throat horse races in America. And it’s important to know, no goats were harmed or mistreated during the events.

Other than the goat races, there was music, performers on stilts, face painting for the kids, African dancing shows, and more. The five hour event was fun-filled and a totally memorable experience.

Would you go watch the Goat Race?

My name is Mandi and I have a gypsy soul. I quickly realized the normal, sedentary life just wasn't for me, so I've made it my life's ambition to never stop exploring. This decision has led me to study, volunteer, intern, work, backpack and travel all over the world, including Rome, London, Costa Rica, India, Southeast Asia, Montana, and San Diego. Now I'm living and always writing in Dar es Salaam, Tanzania. Keep track of where I go next via thislimitlessworld.com and @1LimitlessWorld.