In a world full of cultures that have mimicked one another for centuries, Marrakech is a city that stands out as incredibly unique.

You need months, if not years, to properly penetrate Marrakech in any real and authentic way, but if you’re short on time like I was, here’s the best way to spend 24 hours in this fast-paced city. 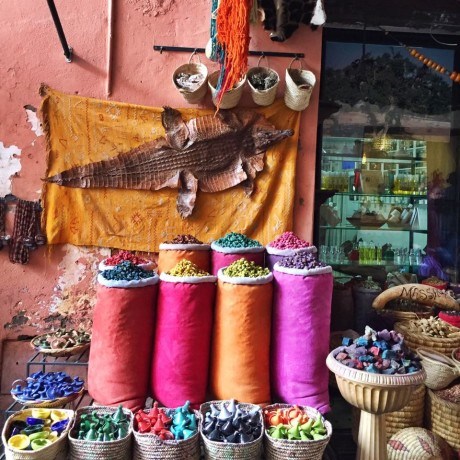 I’m not usually the kind of traveler who hires a guide to take me around—I’m much more of the “I’ll figure it out on my own” variety. But Marrakech is a maze, as each alleyway leads to another and then another and then leaves you so turned around you’re pulling your hair out at another dead end. It’s a jumble that touts take full advantage of, too, and if you’re walking around looking lost anywhere in the old medina, men will come up to you asking if you need directions and then stay with you until you pay them.

To avoid wasting time and energy, we hired a guide for one day to help us navigate the things we knew we wanted to accomplish—see some cool sights, and shop til we drop.

We read a ton of great reviews on TripAdvisor about Youssef of Marrakech Tour Guide, but when he was unavailable (he books up in advance) he sent someone else from his company who was also fine.

Our guide showed up a little late after some confusion about the name of our hotel, but was courteous, and though a little quiet (English is difficult for many here, even those in the industry), he took us around to some of the main sights, and to some shops also.

** Understand that if a guide takes you into a shop, there’s a reason why: they make commission on all things you buy. That isn’t a deterrent for me personally since I came here to shop, but it is something to keep in mind. ** 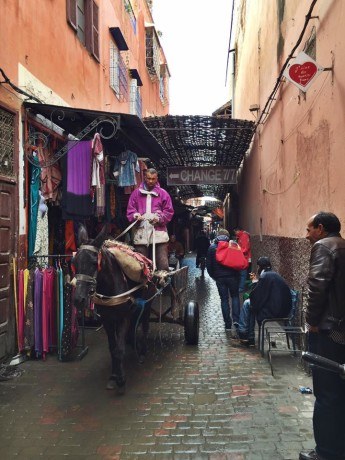 On the streets of the centuries-old medina

Most of the amazing sights in Marrakech happen on the streets or in the main square of the city, Jemaa El- Finaa, which has been a merchant trading port and public square since the 9th Century. But there are some actual attractions you should see too:

Bahia Palace: This ornate palace was built as the residence of the Grand Vizier Bou Ahmed and his concubines (read: sex slaves) who occupied this space in the 19th Century. These days, the furniture is gone but the glory remains in the incredible tile work and gorgeous orange-tree lined grounds. It’s 10 dirham to get in ($1) and totally worth it.

Saadian Tombs: Sounds cooler than it is. The tombs are burial grounds for 66 members of the Saadian dynasty and their slaves. Some are incredibly ornate and over the top (the sons, mostly), and there’s a separate burial for the women, which is pretty but not nearly as lavish—no surprise there! 10 dirham entry fee.

Koutoubia Mosque: It’s not open to non-muslims, but this famous landmark set right across from Jemaa El- Finaa is a good place to know just to orient yourself to Marrakech a bit better—you can see it from anywhere in the city.

Jemaa El- Finaa: Though it’s incredibly overwhelming, you’ve got to spend at least a little time here people watching, but keep a close eye on your stuff. The main square is filled with snake charmers—who will just come up to you and put a snake on your shoulder if you’re not careful—as well as henna tattooists, fortune-tellers, and orange juice peddlers. The orange juice is incredible, btw. 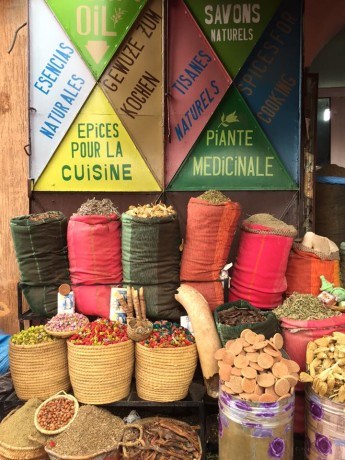 Shop The Souks of Marrakech

I can (and will) write an entire post just on navigating the souks of Marrakech, because they are that impressive. I will say though, I would have never found my way out without the help of a guide, nor would I have figured out what I was looking at half of the time.

The souks are composed of the main merchants on the streets and smaller sections where the crafts are actually built—here you’ll find leather handlers, metal merchants, welders, etc, which is awesome to see because you realize everything that’s being sold was actually constructed in Marrakech, right down to the weaving of the carpets that appear on boots and bags.

But here’s where I get to break some bad news to you: the souks require a lot of energy. The energy of not being able to shop without someone asking you what you’re willing to pay, and the constant energy it takes to keep yourself in check based on where you are, where your possessions are, and who is looking your way (everyone) can be draining.

You’ll get the thrill of haggling the first few times—after that, it’s just obnoxious.

Having travelled through more of Morocco, I will also say, you won’t get the best prices here. Up north in Chefchaouen, the same items I saw in Marrakech started off much less, which meant I had to haggle less to get to a place I felt comfortable paying. So, don’t blow all of your money here if you’re heading elsewhere.

Marrakech and Fes have the biggest medinas in the city—Fes’ medina is the largest of the two—and while that means you’ll have the best selection here, that doesn’t always mean you’ll be able to get the best deal.

At the end of the day though, is it worth it to spend 20 minutes haggling trying to pay $5 less? I think not. 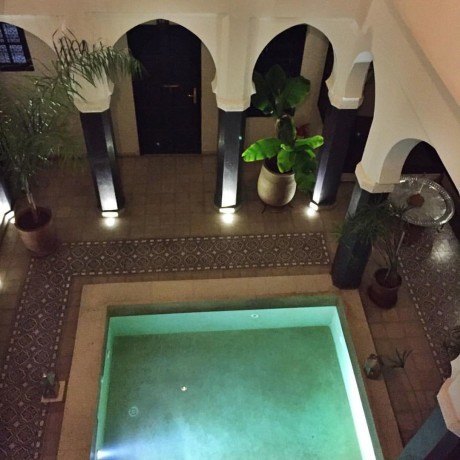 Inside our gorgeous hotel!

Riad Alnadine was a perfect place to stay in Marrakech. Boutique enough to feel fancy, but also relaxed and right in the center of everything. The owners are also incredibly courteous–they walked us to a restaurant at night, gave us a GPS so we wouldn’t get lost on the way back, and even went out in the morning to buy my friend some pads in a time of near crisis. I would recommend any and everyone stay here—it’s that good. And the breakfast is to die for! We got a great rate on Booking.com, which is also my personal go-to for booking cheap hotel stays.

Stay tuned for more about the souks, the scams and the thrills of Morocco. Have you been?