Trending
You are at:Home»Asia»Bhutan»Things that Make Bhutan Awesome
By Kelly on June 15, 2017 Bhutan

The Kingdom of Bhutan is commonly referred to as the world’s happiest country, run by a government-instituted policy called “Gross National Happiness” which weighs major social policies with overall happiness.

Naturally, this New Yorker came here with just a touch of cynicism. Could it be true? Is this really the happiest place on Earth?

Here are a few things I found to be totally awesome about Bhutan.

Students in schools throughout the country are given a plot of garden to raise in their spare time. So if there’s time after the morning assembly before classes begin, students head to their garden to water it and ensure it’s growing. I can’t think of a better way to raise an environmentally-friendly generation.

As a former smoker who recently quit six months ago after 15 years, I really appreciated this. Especially as I’d just come from China, where everyone is smoking indoors and out. Unfortunately that doesn’t mean that people don’t smoke—they just have to do it in private at their homes, or in private bars or sections of hotels. On the street and around the towns though, you don’t see anyone smoking. 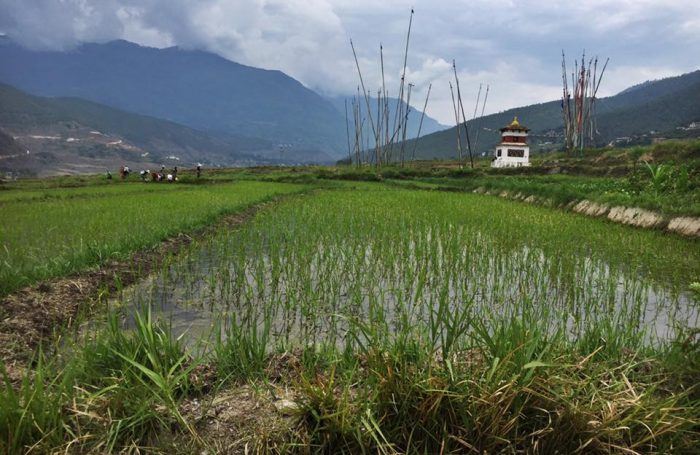 Sections of Bhutan’s National Highway are made from recycled plastic—a really forward-thinking decision for such a small country sandwiched between two of the world’s biggest polluters: India and China.

It’s partly the religion, Buddhism, that influences this but it’s also decreed in scripts found on walls throughout the town. Bhutan has a military, but they mostly assist in the event of national disasters. 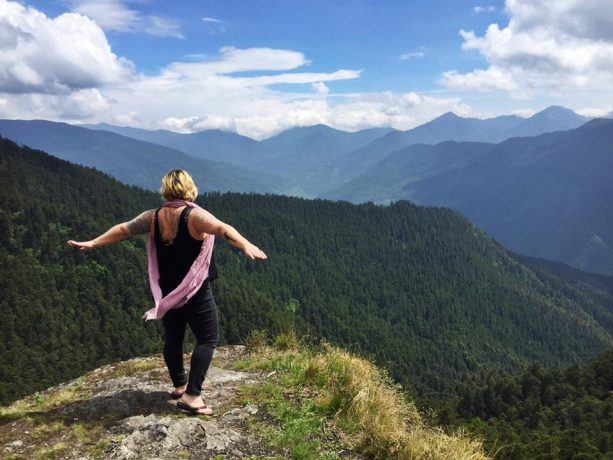 Before that, people were feeding to their pigs. I don’t know why I think that’s completely adorable, but I do.

Bhutan is a small country run by a king and queen, but it’s also democracy, as decreed by the last king. At first, the decision to institute democracy was met with some unhappiness by the people, who preferred the royal family to rule. But now, the locals tell me, they’re happy to have both a democratic system and a royal family. BTW, since the country is so small, if you share a few beers with locals they’ll tell you awesome stories about the royal family, who most know personally because they’ve gone to school with them, or they know someone who works for them, etc. The stories would make for great movies! 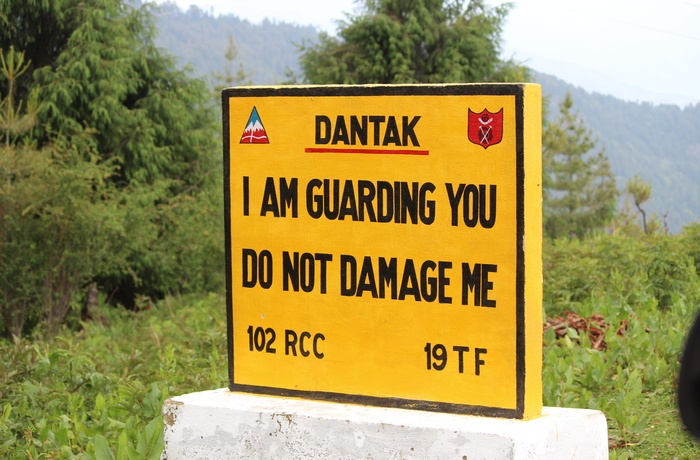 There is one road that connects most major cities. It’s called the National Highway and it’s a very narrow strip of sometimes-paved-sometimes-not-road that climbs up and down major mountains with no guardrail and two-lanes of traffic. In short, you really need to have a driver who knows what he’s doing to keep from feeling like you’re going to die… and even then….

My favorite part of traveling this highway though, are the hilarious street signs you’ll find in/around Paro on the way to Thimpu.

I asked my tour guide—what’s your favorite part of Bhutan? And he said, “we have a saying here, that when you’re having good times, everyone is there to celebrate with you, but the bad times are when you really find people who care. People here really live this,” he said. From what I saw, it’s totally true—we frequently saw people farming in rice fields, and I was told that they’re all neighbors who help each other out during the harvest. That’s so sweet!

Ok, this one might not sound like a big deal to you, but travel through central India and Asia for a couple of months and then come here. Heaven!

There are definitely things I didn’t love as much (unfortunately, the food wasn’t the best) but all in all, I’ve found traveling Bhutan to be comfortable, enlightening and a lot of fun.

Have you been? What are your favorite things?