Trending
You are at:Home»Asia»China»Volunteering with Pandas in Chengdu, China
By Kelly on May 28, 2017 China

I recently lived out my wildest dreams: I hugged a panda!

It was the most magical 20 seconds of my whole life and I will never forget it for as long as I live. Seriously—my grandchildren will see the photos I got!

The experience was phenomenal, but it didn’t last long, and it didn’t come cheap! Here are the details on how it all went down.

It all started with a trip to Tibet I had planned with my friend Nellie of Wild Junket. I went through the process of applying for a Chinese visa and was granted a 10-year multiple entry. Awesome! Except that if you’re flying to Tibet via Kathmandu, they cancel your Chinese visa in exchange for a special Tibet permit. I didn’t want to lose my 10-year all-access-pass, so I entered mainland China first, via Tibet.

Chengdu is in the southern part of the country and is famous for two things: spicy food, and pandas.

There are two panda research centers here: the Chengdu Research Base of the Giant Panda Breeding, and the Dujiangyan Panda Base. The first is much closer to the city and houses lots of baby pandas (eek!) but does not offer the ability to volunteer and to hold a panda—two things I desperately wanted to do. 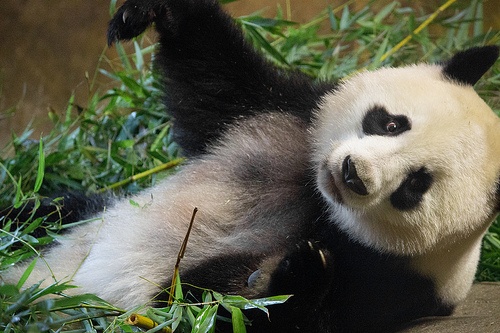 Setting Up Your Volunteer Experience

It was pretty seamless to become a volunteer—I just reached out to the center via email and asked if they had any volunteer opportunities available. They only have 30 spaces available per day and fill up quickly, but they were able to fit me in on one of the days of my stay. To my surprise, their response and the confirmation were done really quickly.

With one caveat: I had to fill out a doctor’s form declaring I didn’t have a host of crazy diseases like bubonic plague (seriously!). I was in India at the time, and didn’t know how I’d pull this off—I even went to a doctor, who wouldn’t sign it without a full physical.

Luckily, one of my doctor friends stepped up, signed and scanned the form to me, so that I could turn it in. That was it! I really think it’s more of a formality than anything else.

I should tell you now that you can also have the opportunity to volunteer by booking with a company like Viator, in which your guide will also accompany you for the day.

There were several people around me who went this route and it did seem like they had more dedicated translation and service, whereas those of us who booked independently were often hanging out in limbo, wondering what we should be doing.

The day starts off bright and early with check-in at 8:30 a.m. when the park opens. First, you’re given a few forms to fill out and a shirt to change into.

Then, you’re brought to the panda enclosures for cleaning.

The staff members instruct you on how to pick up poop and discarded bamboo shells. You’ll also be given bamboo shoots that you’ll whack on the ground to break—this makes it easier for the pandas to eat.

If you want to take pictures, your handler or guide will take them for you.

It’s not the most fun I’ve ever had, picking up panda poo, and I didn’t really feel the need to take pictures of me doing it, but the time goes by quickly. After this, you’re taken to a room where you can feed a panda little bits of “panda cake” by hand. 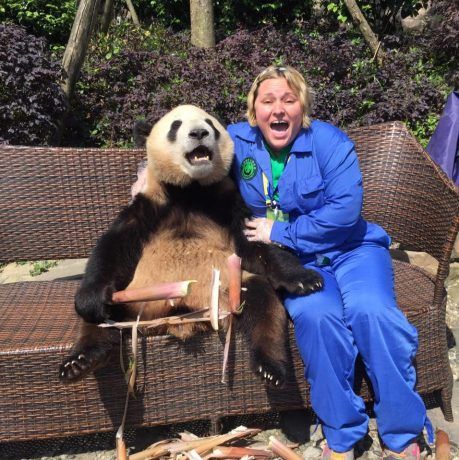 From here, it was time for the big show—the chance to hold a panda! Now, this is an extremely limited opportunity—only 15 people per day are able to participate, and it only happens at 10:30 a.m. It also costs a lot to do this: a donation of 1,800 yen, which translates to roughly $260. Yeow!

This puts a lot of people off of signing up for it, but the money goes towards the conservation and preservation of pandas. And when else are you going to have a chance like this?

There was no way I was going to let it pass me by—I was so excited just by the thought of being that close to a panda, I couldn’t sleep the night before.

One by one, they put everyone in blue jumpsuits and lined us up together and then the little panda comes out and jumps on a bench and we all have 15-20 seconds of heaven with him while the staff snaps away capturing videos and photos.

They’re really good at doing this, which is awesome. They captured some pretty hilarious moments in which my face was contorted into such happiness I look like I’m about to cry. I was.

You’re instructed not to touch his ears or his belly as they’re too sensitive. But you can hug him, like a person!

I’ve never felt joy that intensely! All I kept saying was, “I love you! I love you!” And he put his little paw on my leg and patted me and he looked up at me with his cute little panda face and I melted into a place I can only describe as pure and total ecstasy.

I was the only one of the bunch that he really interacted with—mostly he was just into his bamboo—it felt like the greatest gift.

The Rest of the Day

After that, I had entered a place of such pure happiness that the rest of my day (or my life, really) just didn’t matter.

We had lunch, which was a basic but busy buffet for staff members.

And then we watched an awesome movie about the plight of the panda and the conservation efforts of the center, in which we watched a panda giving birth (whoa!).

Since the opening of the center, they’ve introduced 170 pandas to the world—a huge number when you consider that pandas are endangered and there are less than 3,000 left in the world.

Did you know that a female panda only has 2 days in the entire year in which she can conceive? It’s incredible that they still exist at all.

After the movie, we cleaned more and fed another panda. Then we made the “panda cake” that we fed them. We got a certificate, a t-shirt, and that was it! 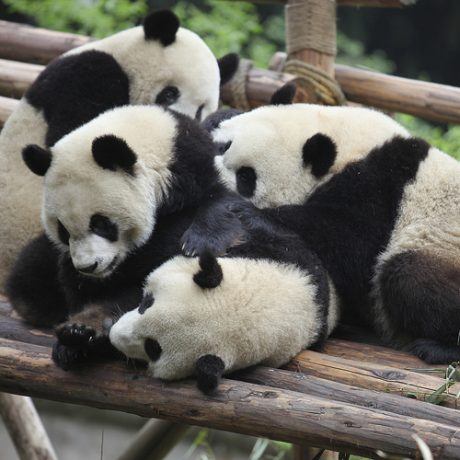 It was not a cheap activity. Volunteering cost 700 yen for the day—steep price to pay for the joys of shoveling panda poo!

Panda hugging was 1800 yen. I did not trust my ability to navigate the train system in Chinese, so I took a driver, which cost me 400 yen. I think I made the right call on this though as having him there when I was ready to go was awesome.

If I Were to Do It Over

I enjoyed volunteering with pandas, but I don’t know if I would do it again because of the cost. I could’ve booked a viator tour, which would’ve picked me up in town, driven me to the center and back, and allowed me to hug a panda, and it would’ve cost me less.

Volunteering was interesting though, to see the enclosures and to feed the pandas and just to see the way in which the pandas are so loved, but I would’ve liked the opportunity to just walk around the park and spend time with the pandas, which I didn’t really get to do because I was knee deep in.. work. By the time we had time off, it was hot afternoon and they were sleeping. Bummer!

All in all, it was one of those days I’ll never forget.

Would you hug a panda?