Trending
You are at:Home»Asia»China»Traveling in Tibet: Things I Loved and Didn’t Love
By Kelly on June 4, 2017 China

Traveling in Tibet has been on my bucket list for years, and I’m so glad I made it to this remote and incredible part of the world.

But I won’t lie to you—there were things I loved and hated about traveling in Tibet—and, well, it’s kind of my job to tell you about them.

I’m more of a bad-news-first kind of lady, so let’s just get the icky stuff out of the way, shall we?

Holy mother of God, the squat toilets here are the WORST I have ever encountered in my whole entire life. In general, Tibetan toilets will just be holes cut into cement, or a large trough, that you do your business in. There are no doors on these toilets, so don’t expect privacy. If you get a small divider, consider yourself lucky.

Sometimes the toilets are outside with no roof, walls, etc. There is never toilet paper so you learn to bring your own.

The problem is, all that business piles up and up and up in these holes and then overflows all over where you’re supposed to be stepping. And, somehow, people also don’t know how to aim, so there’s literally pee and poo EVERYWHERE.

In one, at the base of a monastery, I walked in to find four stalls with small dividers that had a large trough running the length of the floor, and feces, on both sides of the dividers, in every single stall. Alllll over.

I don’t even know what position you have to put yourself in to get shit on the walls like that, but I do know that when you’re squatting, you have to naturally lean a little forward, which puts your face way too close to said wall for comfort.

I kid you not, I almost mowed an old lady down trying to get out of that bathroom and I cannot unsee those images. And that was at a monastery! Ugh.

I found this youtube video shot by some brave soul that almost compares, but I dare say that my experience was even worse. Don’t click on it, the starting image is bad enough. HOW IS THIS POSSIBLE?

It’s sad to meet such wonderfully caring and kind Tibetans and know that they won’t ever get to travel because Tibetans are not allowed to have passports.

The relationship between Tibet and China is touch-and-go. On the one hand, China has built most of the infrastructure in this region and thus claims it as their own. On the other, they’re extremely oppressive of Tibet religiously (hence why the Dalai Lama is still living in exile in India) and there are constant abuses of power.

They also periodically just close their doors to tourists, like they did in 2008, which put many people out of work.

The relationship here is better not discussed. Asking too many questions will put your tour guide in a tough and uncomfortable situation, and the general consensus is that as an outsider, you won’t ever know the full truth anyway, save to say that it’s complicated.

You also won’t be allowed to travel to most regions of the country, and you can expect to have your passport checked several times on any long road-trip by checkpoints. 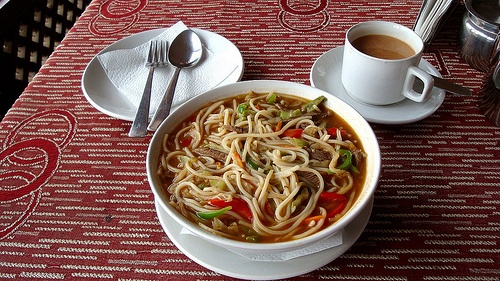 I’m sorry. I really am. I wanted to like Tibetan food, but I found it all to be kind of blah. Lots of yak meat and yak butter and yak cheese, which is okay, but most of my meals were just too bland or too salty. I think I had a few pretty solidly okay meals, which was about what I expected. I’ve honestly never heard anyone rave about the food in Tibet, so my hopes weren’t that high. Bummer that these meals were also twice what I paid in Chengdu at roughly $8-10 per meal (to be expected, I guess).

Okay, can we talk about the good stuff now? 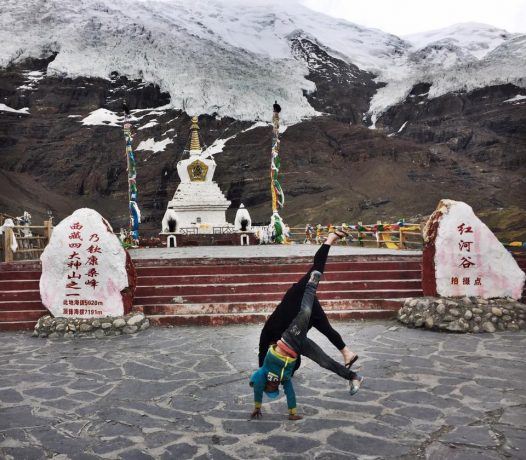 By and large, I found Tibetan people to be incredibly kind, if a little shy. They’re a peaceful people who have been through a lot, so it makes sense that they’d be just a little reserved to outsiders, but when you crack through that, you find warm, loving, generally happy, very devout people. It really helps if you can speak Mandarin here, as most people will not speak English.

The people I met in Tibet were lovely. The kids, especially, were so adorable. Like this one pictured above, who I had an impromptu cartwheel contest with. 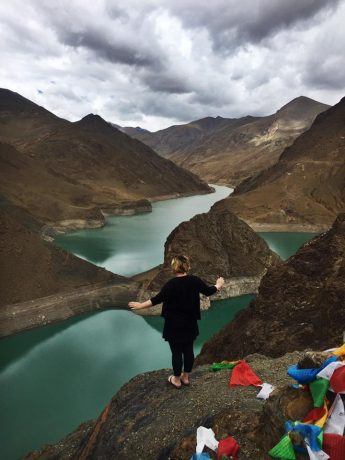 Wowza, is it ever beautiful. Getting outside of the major cities like Lhasa and Chigatzen, you’ll see absolutely stunning scenery—rolling snow-capped mountains, turquoise glacial-water lakes, fields that roll on for ages. I spent most of the week glued to my window, taking pictures of the majestic landscape passing me by.

I walked away from Tibet with a heightened awareness of Tibet and Buddhism. We visited several interesting monasteries and of course, Potala Palace, where we were told stories about the gods, the Buddha, the great llamas, and the region itself. It was a highly educational tour, which I really appreciated. 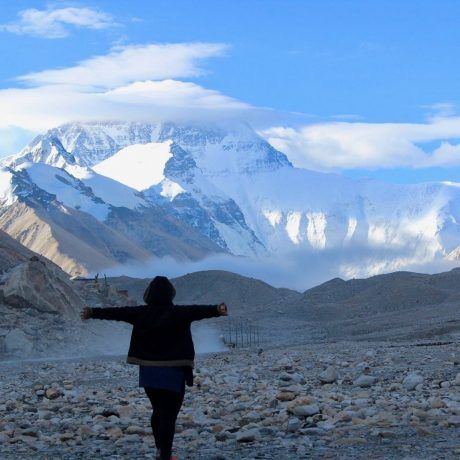 In a standard 7 or 8-day tour of Tibet, you’ll visit Everest Base Camp (there’s also one on the Nepali side) which was an incredible thing to see with my own eyes. To be that close to Mount Freakin Everest was a joy, and spending the night in a tent heated by flaming yak dung with 12 of my newest friends to watch the sunrise over the mountain was hilarious and fun and unforgettable. Just hold your breath when you use those toilets in the morning, yikes!

Would I do it Again?

Overall, I loved my experience in Tibet and I’m honored and grateful that I got to have one. Tours in Tibet are all conducted on a very well-worn travel circuit—the travelers we met with other tour companies in our hotel on the first day we saw at the same restaurants, same monasteries, same hotels throughout our stay—so I’d like to switch it up for next time and visit Mount Kailash, which is less busy.

We were given free time most days to wander around Lhasa on our own, so it didn’t feel like you were being watched every minute of the day, which I really enjoyed.

And the standard of the hotels you sleep in and the roads you drive on were really pretty decent, so that wasn’t an issue either.

I’d definitely go back. I’d just drink even less water so that I used the toilet as little as possible.

Would you go to Tibet?