Trending
You are at:Home»Asia»I’m Asian, Not a Hooker! Encountering Dubai Nightlife
By Jaclynn Seah updated on May 11, 2018 Asia, Dubai

It is close to midnight in Dubai, the girlfriends and I were all back at our five-star hotel dressing up, ready to check out the local clubs and have a good night of taking in the Dubai nightlife.

While two of the girls were primping upstairs, I headed down to the lobby with the one friend who was done – the club we wanted to check out was conveniently located on our hotel’s premises – and we took a seat in the lobby to wait for our friends.

Less than two minutes after we settled in, a hotel security guard approached us, “Ma’am, are you guests of this hotel?”

I nodded and said that we were, showing him our keycard.

Woah easy there tiger! The barrage of questions was surprising, but we answered them dutifully, and finally, seemingly satisfied, the guard left us alone.

We assumed at first it was just diligent night security at work, and would not have brought up the incident to the group had similar things not kept happening that night.

We four girls and our guy friend were not allowed entry into the club as a group unless we spent a minimum bombshell sum, but when we split up into two separate groups at the next place we had no problems.

If we so much as paused for a breath while crossing the hotel lobby, hotel security was right there asking questions immediately about our motives – even as I made my way up to the room alone at 2am, with my keycard in plain sight, I was not let off the hook and asked repeatedly where I was going and who my room was registered to.

My friend, an expat living in the UAE for the past two years, explained it to us – despite Dubai being one of the emirates and technically under strict Islamic law, its reputation as the “playground of the Middle East’ extends to its night life scene, which is very loosely governed, and apparently one of the most common sights in their high-end nightclubs and hotels? Prostitutes. 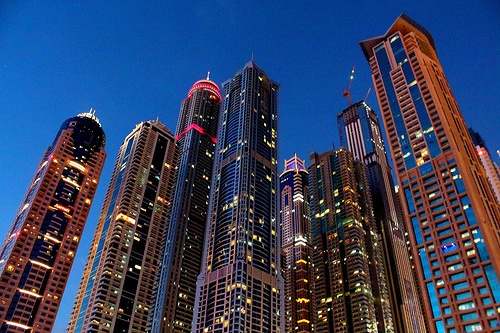 While the Eastern European sort of blonde hair blue eyes look was quite common, the Chinese and other Asian prostitutes were also a rising figure in the nightlife scene.

In the 28 years of my life and travelling, I have been mistaken for many things – being younger than my actual age, being of a nationality that I am not, speaking a language that I don’t. But getting mistaken for a ‘lady of the night’ while in Dubai? That was something new to me.

In retrospect, it is worth a chuckle. Me, little ol’ me, looking anything like a prostitute?

I wore a mid-thigh length gold dress that night, but with my plain looks, lack of assets and general disinterest in chatting anyone up, I don’t think I look anything like a hooker! A lot of things made more sense after that revelation though – why the security clamped down on women in the lobbies, the refusal of entry at the first club…

But right there at that moment, I found it pretty stressful having to repeatedly deny that I was a hooker just because I was Asian, and I was probably lucky I didn’t get hit on – one of the other girls did encounter a leering sort when she was making a phone call outside the club, though honestly that’s not particularly unusual in a club. I was quite happy to be back up in the room, taking a bath to try and get the smell of cigarette smoke out of my hair.

Check out this article from the Guardian for more insight into prostitution in Dubai, according to the article it is pretty rampant in the high end nightclubs and hotels because solicitation out on the streets is still illegal under Islamic law and they don’t have a red-light district.

So, Go Girls passing through Dubai and thinking of checking out the Dubai nightlife, don’t be too surprised if you get mistaken for a hooker in the clubs…especially if you’re asian.

And if you do chat up a nice guy, remember that while they close a blind eye to prostitution, there have been people thrown in jail for public displays of affection so keep any action behind closed doors!

Jaclynn Seah is an Occasional Traveller from sunny Singapore who really hopes to become a more frequent traveller someday. But for now, she has a little blog and shop over at The Occasional Traveller where she hopes to inspire and remind others like herself to take some time off and just... escape!