Trending
You are at:Home»Asia»Tibet»Traveling to Tibet: Your Top 5 Tibet Travel Questions Answered
By Guest on December 3, 2020 Tibet

When it comes to Tibet, most travelers have far more questions than answers.

If you mention Tibet, a lot of people mistakenly conjure up a scene from Raiders of the Lost Ark — you know the one — where Indy first meets Marion in the bar she runs in a Himalayan mountain village?

The problem is, that scene is in Nepal, not Tibet.

And most folks don’t know that the famous summit of Mt. Everest is located exactly on the Tibet-Nepal border, so you could climb up one side in Tibet and climb down into Nepal on the other. (People have actually done this!)

In this post, I’ll give you a leg up on your Tibet knowledge game, with answers to the top 5 Tibet travel questions. 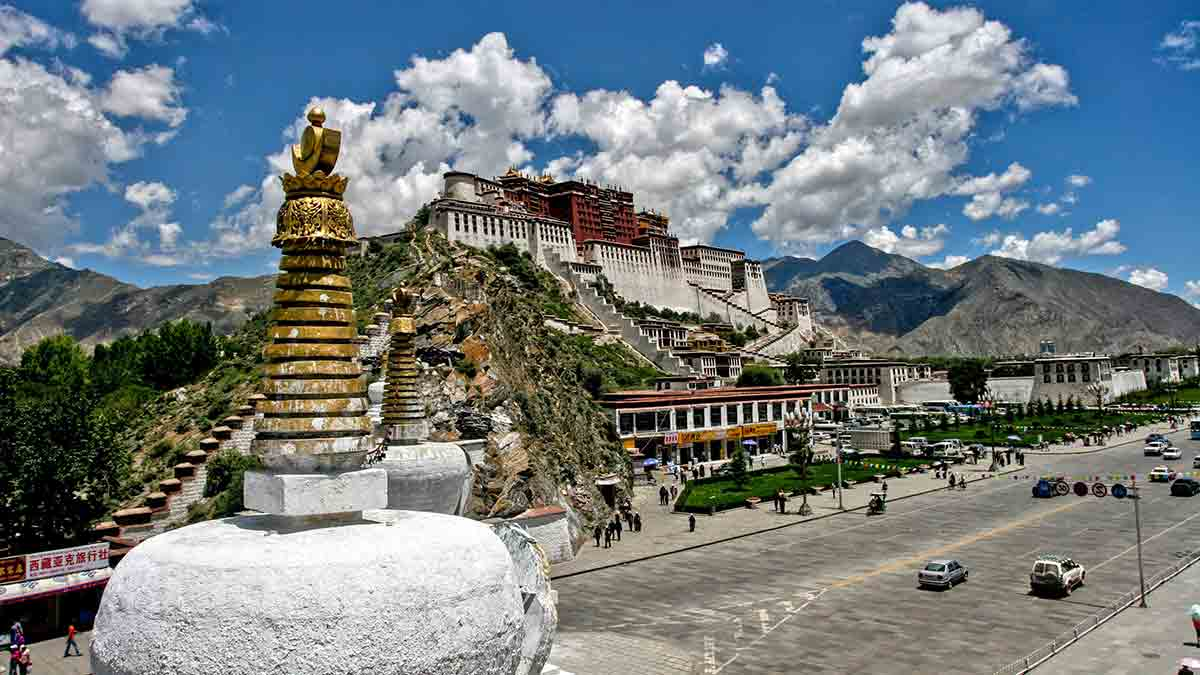 1) Is Tibet Open to Travelers?

Generally speaking, Tibet is open to foreign travelers except for a couple of months out of the year — February and March.

Those closures are due to political sensitivity around the time of the March 10 Tibetan uprisings, and for no really good reason, to the Tibetan New Year dates that often fall in February or March.

*Note that China and Tibet both remain closed to foreign travel in late 2020, due to the COVID pandemic. There is no word at the moment on when they may re-open.

You may have heard that you can’t travel independently in Tibet and that is 100% correct. You have to be on an official tour.

The good news, though, is that you don’t have to join a group tour. You have to be with a guide and, in most cases, a driver, but you can do this on your own in a  private official tour. Of course, private tours are a lot more expensive than the group tours.

2) Is it Safe to Travel to Tibet Alone?

Personally, I feel more safe as a solo woman traveler in Tibet than I do at home in the San Francisco Bay Area, or anywhere in the US.

Traveling solo in Tibet is a misnomer, since you are actually with a guide and driver the majority of the time, except for some freedom to walk around most cities, as long as you are still on your official tour. (To get into most of the more famous sites, you need to be with your guide.)

The biggest dangers about Tibet travel is actually the very real risk of getting altitude sickness. With an average elevation above 14,000 ft / 1200 m, Tibet is for most people the highest elevation they will ever travel. And a LOT of people fall ill with altitude sickness.

The good news is that, though the risk is real, there is a lot you can do to prevent altitude sickness. Essentially, you need to ascend gradually, over a course of multiple days, and if you cannot do that, you should consider asking your doctor for a prescription for Diamox, which accelerates your body’s acclimatization processes.

(Tibetans themselves consider Tibet as an occupied country. Sadly all other countries recognize it as a part of China.)

It may be helpful to think of Tibet geographically, as the mountainous source from which all of Asia’s major rivers flow, including the Mekong, the Brahmaputra, the Yangtse, the Indus and the Ganges.

Because Tibet is officially considered as part of China, the “Tibet visa” is actually not a thing.

Travel to Tibet requires a Chinese visa, plus a Tibet travel permit to visit the Tibet Autonomous Region.

You need to apply for the Chinese visa on your own, at a consulate or embassy in your home country. If you plan to enter Tibet from Nepal rather than from mainland China, however, you will apply for a special group permit in Kathmandu.

Unlike the Chinese visa, the Tibet Travel Permit cannot be obtained on your own. You have to book a trip with a certified Tibet travel agency, and they will request the permit on your behalf.

You may be surprised to know that the weather in Tibet is milder than a person might think, and you can visit year-round, except for the annual February and March closures.

Each season has its pros and cons:

Have you been to Tibet before? Have any burning questions about

Now I’d love to hear what you have to say in the comment section below!

This guest post is written by guest blogger Yolanda O’Bannon. She is a long-time travel writer and photographer with a special passion for Tibet and Asia. With her husband Lobsang, Yolanda makes Tibet travel simple and safe at YoWangdu Experience Tibet where you can learn everything you need for a wonderful first-time visit to Tibet. Yolanda also helps women get unstuck at YolandaOBannon.com.