Trending
You are at:Home»Australia»How Australians Learned to Love Putting Pork on Their Forks
By Kelly on July 27, 2018 Australia

Today, if you’re worth anything in the kitchen at all you have some kind of secret pork belly roasting recipe and you’ve perfected the skill of producing crackling – and that comes in handy when you’ve a table of hungry mouths to feed.

Hard as it is to imagine, prior to 2005 pork was hardly in favour with Australians. Then, smart marketing changed everything. Today, according to the Australian Bureau of Agricultural and Resource Economics, pork is the second most favoured meat, having replaced beef as the king of the kitchen.

The first campaign to change perceptions was the PorkStar campaign. In a word, it was about making this meat cool or classy or both and the evidence of success is clear to see, not just in the form of raw data, but in the delicious array of pork and pork belly takeouts now readily available.

Although beloved by Australian chefs, many of whom were familiar with the cut from overseas, pork belly was neither ‘sexy’ nor ‘appealing’ to diners.

In conjunction with Australian Pork Limited, Mitch Edwards came up with the concept that would change everything. Combining high-level print ads featuring famous chefs in leading food magazines and event dinners, pork was presented as not only palatable but the protein to feature at your table.

It was the first big impetus to the pro-pork movement in dining out as well as eating in and the campaign is now a yearly highlight. Back when it started chefs had to be persuaded to take part – now they find it prestigious to do so. The humble white protein was in and red meat was on its way out. 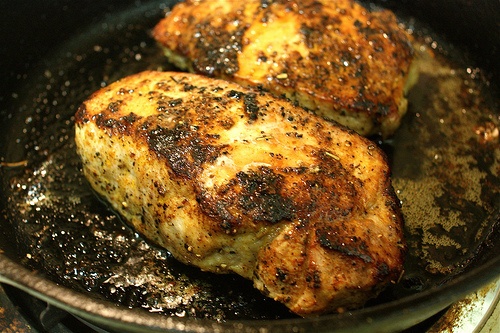 The other major pro-pork push came in the form of predatory marketing. As the name suggests, it’s an aggressive style of marketing to help you make gains over your competitor.

But rather than countering every good value proposition your competitor has to offer, you go for the underbelly (so to speak), for the weaknesses that have arisen out of your competitor’s strengths.

So what were beef’s strengths? ‘Get Some Pork on Your Fork’ as a campaign realised that beef was trading off being a ‘pro-health’ choice packed full of iron and vitamins, protein and nutrients.

With so many positive aspects going for it, was there even a weakness? Yes. Beef is not only high in nutrients, it is high in fat. The pro-pork message was: beef has double the fat of Australian pork and pork also contains iron and nine nutrients.

After that, it didn’t take many palettes to be thoroughly convinced. Asian-style sweet-and-sour pork is a takeaway favourite, while lovers of Italian cuisine see its inspired pork dishes as a treat. A classic pork belly roast or marinated pork ribs are staples when the barbecue coals come out. Pork on the Australian fork is now a foregone conclusion.