Trending
You are at:Home»Girls That Go»Girls That Go! An Interview with Alex of Alex in Wanderland
By Casey Siemasko updated on May 5, 2014 Girls That Go, Rad Female Travelers

This week we got to chat with the lovely Alex of Alex in Wanderland, a New York native turned world nomad. Alex is letting us in on what it’s like to be an underwater videographer, which odd jobs she takes on to travel the world, and what her top tips for solo female travel are in this week’s Girls That Go!

Hi! I’m Alex — a New York native with a lot of love for my home state but absolutely zero desire to ever spend another winter within it. I’m happiest when I’m diving and traveling and soaking up sunshine, but a close second has to be sharing the journey through my blog, Alex in Wanderland.

I’m currently at the beginning of what I’m sure will be a grand Latin American adventure. As I type this, I am dripping sweat on my keyboard and bouncing around a local bus heading down the coast of Peru.

GGG: Typing on a bus in Peru! That’s really some dedication! Okay tell us more about the Great Escape! What got you started on it, and how long have you been traveling for now?

I was bitten badly by the travel bug as far back as I can remember. I dreamed of taking a “gap year” before college, but at the time I didn’t even know that that was a thing, let alone that it was called a “gap year.”

Halfway through college I went on my first solo-backpacking trip to Southeast Asia, and my mind was blown right open. I discovered that long-term travel was something people actually did – people other than just homeless degenerates, criminals on the lam, and Europeans. Within weeks of graduating I was on a one-way ticket out of the country. That was two and a half years ago, and I still show no signs of resuming a permanent address. 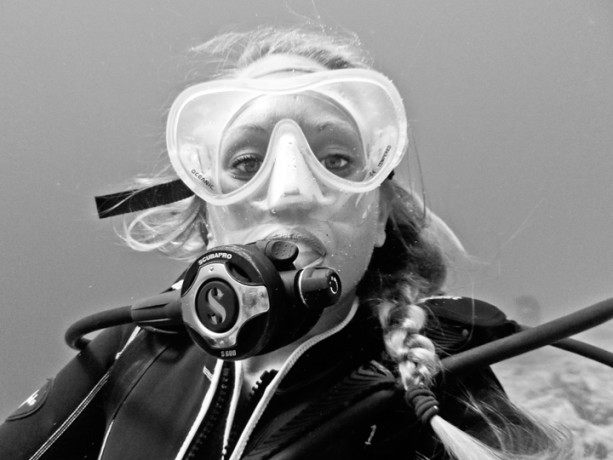 GGG: You recently got your divemaster! Many people dream of traveling the world and working as a scuba instructor. How did you get started diving?

I did my Open Water course in Thailand in 2009. I was completely terrified of the ocean, but completely smitten with a certain dive instructor. Three years later the relationship ended, but my love of diving did not! Along the way I earned my advanced and rescue certifications while working in The Cayman Islands, won a grant from the Women Divers’ Hall of fame, and completed my divemaster in Indonesia. In between I filmed whale sharks in Thailand, went dry suit diving in Iceland, and went night diving with manta rays in Hawaii. I did my divemaster primarily to enhance my on-and-off work as an underwater videographer. It’s a job I stumbled into while assisting a photographer in the Cayman Islands and continued when I moved to Thailand, but it’s an extremely competitive field and I wanted to give myself a leg up.

GGG: Would you recommend it to others who want to travel the world?

Finding work solely as a divemaster is rare and extremely poorly paid. Those who hope to work in the dive industry will need to invest in the next step, becoming an Open Water Scuba Instructor. While it’s not an industry you’ll strike it rich in, it is a viable way to work and travel around the word.

GGG: How do you sustain your full-time travels? Have you ever had crazy jobs abroad to you keep your travels possible?

Today I support myself primarily through my blog, Alex in Wanderland, as well as a few freelance writing and graphic design gigs. It took 3+ years to build up the connections and reputation that allow me to live this way. I’ve found some clients and connections through conferences or recommendations from my pre-travel life, but I’d say the majority of my success comes from connecting with my fellow digital nomads. Back when I was just getting started, there were some big names who mentored and supported me and helped me get to where I am today. The fact that they gave me their times and their friendship gave me a lot of confidence that I could make this work.

Before my online work took off, I did whatever odd jobs came my way to make ends meet, and I stuck to Southeast Asia where the cost of living was low. Often I worked for between $2-3 per hour bartending, babysitting for dive instructors’ kids, or handing out flyers on the beach.

GGG: Sounds like you have really put the work into making your travels sustainable! What keeps you traveling?

I actually love being home and miss many things about having a more stationary life. Yet the road is always beckoning me back. There are so many cities I want to get lost in, oceans I want to dive through and cultures I want to explore.

As soon as one trip is in progress the next one is usually already bouncing around in my brain, slowly gaining traction until it becomes an obsession. The only cure is booking a ticket.

GGG:  I can definitely understand that! You do a lot of your traveling solo. What tips do you have for other solo female travelers?

Trust your intuition. It’s going to be impossible to completely avoid ever walking down a dark road alone at night — unless you like eating dinner at 5pm — so you have to believe that your gut will guide you.

Also, being alone shouldn’t be viewed as a burden. I used to be terrified and sad at the thought of traveling solo. Now I know the joy of being a party of one – how easy it is to meet people, how empowering it is to take control, and how lovely it is to hear my own thoughts so clearly. To get to know yourself so well should be considered a gift.

GGG: Where can we expect to find you for the remainder of the year?

I will be traveling through Peru until early December at least, at which point I’ll most likely head towards Panama. In March I’m flying to California for a wedding and then traveling back to the East Coast overland. After that, I’ll see which item on my bucket list is calling out the loudest!

Thanks so much for the great interview, Alex! I’m definitely inspired to go out and do some scuba diving now. Be sure to stay updated on all of Alex’s wanderings on her blog, Alex in Wanderland and on twitter

Casey Siemasko is a freelance writer, blogger, and avid traveler. She finds her life inspiration by exploring new places and meeting new people, and seeks to find magic in the most ordinary of places. When she's off the computer, she enjoys practicing yoga, training for marathons and scuba diving. Somewhere in there she also found time to write an eBook, 101 Tips to Living in Taiwan. She and her husband comprise the two lovebirds and digital nomads documenting their travel musings at http://acruisingcouple.com.