Trending
You are at:Home»Girls That Go»Girls that Go! – An Interview With Ali Of Ali’s Adventures
By Sara Button on February 18, 2016 Girls That Go, Rad Female Travelers

This weeks’ featured gal is Ali of Ali’s Adventures. Check out how she has traveled to all 7 continents, met her husband, and her tips on packing!

GGG: Hey! Welcome to Girls That Go! To start us all off, can you tell us a bit about yourself and how you got started on your traveling?

Hi, I’m Ali Garland and I’m an American expat living in Germany. I’m originally from NJ, but I lived in Atlanta for 16 years before moving to Germany. When I was a teenager, I had a teacher who organized 10 day tours to Europe every summer, so I went three years in a row. That’s what really got me interested in travel. I loved all the history and old buildings in Europe that we just don’t have in the US. I also studied Spanish in high school and university. Because of this, I participated in a study abroad summer program in Salamanca, Spain when I was 20. I was definitely hooked by that time. Since then I’ve been to over 40 countries, and I made it to all seven continents before my 30th birthday.

GGG: You have two websites for travelers – Ali’s Adventures and Travel Made Simple, can you tell us what inspired you and what keeps you going?

I started Ali’s Adventures first just as an outlet for my travel passion. I was still working in a full time office job in Atlanta, and writing about travel was the next best thing when I couldn’t actually hop on a plane. The site has evolved over the past four and a half years, and while it’s still where I write about my personal experiences with travel, it’s much more than that now. I also write about the ups and downs of expat life, I give advice about the places I visit, and I write a travel spending post for almost every city or country I travel to so my readers can get a good idea of what it costs for those who aren’t luxury travelers but also aren’t bare-bones budget travelers.
Travel Made Simple is a site I started a couple of years ago when I realized how much I enjoy helping others travel. I love the planning aspects almost as much as the trip itself. I think travel is amazing, and one of my goals is to encourage others to give it a try. So the site is set up for new travelers. I write about how to plan a trip and the logistics that go into it, packing tips, dealing with travel-related fears, solo travel, suggested itineraries and more. The idea is to inspire people to travel and give them the tools they need to do it.
GGG: That’s great! You took a 5 month round the world trip, where did you go and how did you decide what to see?
I started in Southeast Asia, traveling through Singapore, Indonesia, Malaysian Borneo, Brunei, Cambodia, Laos and Vietnam. Then I traveled to Australia, New Zealand, Bora Bora and Easter Island before going back to the US to visit friends and family. It ended with a few days in Venice, where I met up with my husband for Carnivale before we went back home to Germany. It was kind of a crazy trip going between hot and cold climates, cheap and expensive, and overall I traveled too quickly. There were a few destinations I knew I wanted to see and I planned the rest around those. I also used frequent flyer miles to book a round the world ticket. Though in hindsight, the RTW ticket was too restrictive, and if I had to do it all over again, I think I’d still use the miles but get a round trip ticket to South America instead and leave the middle open.
GGG: You’re living in Freiburg, Germany now. How did you come to settle down in this location?
I’ve always wanted to try living in Europe, and around the time I started researching how to make that happen, I met Andy who had already been living in Freiburg for a few years. We fell in love and got married, and it was never really a question. I wanted to live in Europe, and he was already there, so I moved. I don’t think Germany would’ve been my first choice, but now that I’m here I really like it. Germany is a wonderful country in many ways, and even though Freiburg is a small city, it’s in the Black Forest so it’s really pretty and it’s a great place to base ourselves.
GGG: Do you rent out your apartment and do you use any of the Airbnb or HomeAway websites?
Since we travel a lot, and sometimes for long stretches of time, we do rent out our apartment when it makes sense. We live in a college town so there are always students or visiting professors looking for short term housing, and that makes finding renters for our apartment fairly easy with the local rental sites. We haven’t yet tried to rent it on Airbnb or any of those sites, but we do often use Airbnb to rent apartments while we’re traveling. I really love staying in apartments when we’re on the road, especially if it’s more than a few days. It’s such a great way to experience a city, it’s more comfortable having extra space to spread out, and we like having a kitchen so we don’t have to eat out for every single meal. 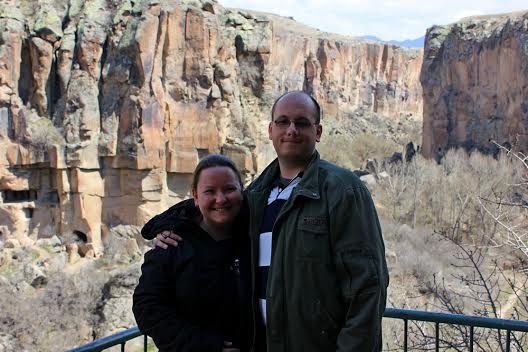 GGG: We talk a lot about relationships – Did you meet your husband on the road?
Not exactly. When I was switching my blog over to self-hosted, I tweeted about needing help with pieces of it. Andy just happened to see my tweet and offered to help me out on Skype. We ended up reading each others’ blogs after that, and the topics he was writing about really resonated with me. I started emailing him questions about his experiences with moving abroad and eventually we talked on Skype again, and it was one of those conversations where we just talked for hours about all kinds of things and we really clicked. Despite the six hour time difference we talked for hours and hours every weekend, and we emailed back and forth throughout the week. It’s amazing how well you get to know someone when all you have is talking, no movie dates spent in silence. After four months of getting to know each other online, we finally met in person in Prague. We got married about 10 months after we first met through Twitter, and a month later I officially moved to Germany. We’ve now been married for three years.
GGG: Wow that’s quite a story of how you met and congrats on 3 years! We see you just wrote a book as well, can you tell us more about it?
The book is called Packing Made Simple: A Simple Guide to Packing Light. I’m a big believer in carry-on only travel because you really don’t need tons of stuff when you travel. Traveling with only carry-ons feels like freedom to me because I don’t have heavy bags to lug around, and I don’t have to worry about baggage fees or the airline losing my luggage. The book is loaded with advice on how to pack carry-on only, how to choose clothing for your trip, how to limit your liquids, how to pick out carry-on sized luggage, a suggested packing list, and much more. I also included a section on packing light with checked luggage since I know that sometimes it’s not practical to go carry-on only.
GGG: Any place that you are yearning to book a trip to in the next year?
Everywhere! Seriously, it’s really hard to choose sometimes. Since my husband and I both work from home, we can be more flexible about when we travel, so we’re hoping to escape the cold, dark, German winter by going to Spain for a few months, but it’s still too early to know if that will actually happen. We’re also planning a trip to Italy with my parents in the fall. Beyond that, I have no idea. I try not to think too far ahead when it comes to trip planning because I don’t like getting my heart set on someplace only to have our plans drastically change later. There are plenty of places I’d love to book a trip to, like Eastern Europe or Latin America, but sometimes I think it would be easier to list the places I don’t want to go to because it would be shorter!
GGG: We saw a post on having showered in an airport – name one other bizarre experience you ever had while traveling:
It’s hard to say sometimes what’s bizarre and what’s just part of traveling. I’ve eaten guinea pig in Ecuador and ambuyat in Brunei. While staying in an eco lodge in Borneo, my friend and I woke up in the middle of the night to the sounds of some kind of animal in our room eating food we had accidentally left out. I was one of only two passengers on a flight from Cambodia to Laos. I’ve been to a couple of places where other tourists wanted their picture taken with me simply because I was foreign. Just crossing the street in Hanoi in the middle of dozens of motorbikes seems bizarre but it’s totally normal there. I realize that’s a lot more than one experience, but it’s always those little moments that seem the strangest.
Thanks Ali! To find out more about Ali, check out her websites on travel and packing, follow her on Facebook, and tweet her!
Share. Twitter Facebook Google+ Pinterest LinkedIn Tumblr Email