Trending
You are at:Home»Girls That Go»Girls That Go!-An Interview with Masha from An Unlikely Pilgrim
By Sara Button updated on May 11, 2018 Girls That Go, Rad Female Travelers
In this week’s Girls That Go! we interview Masha, the lovely lady behind An Unlikely Pilgrim AND one of the co-founders of the Women’s Travel Fest (you’ll be hearing more from the other co-founders soon)! Read on to hear from Masha about being a pilgrim, what she misses about her adopted home when she’s gone, and her favorite recipes from her travels!
GGG: Hi! Welcome to Girls That Go! Can you tell us who you are, where you’re from originally and how you started traveling internationally?
Hi! Thank you for asking! I was born in Russia, while it was still part of the USSR which translated to growing up with very little (what is this thing you call toilet paper?) and absolutely no chance of getting out.
I grew up watching Crocodile Dundee and dreaming about what that world could possibly be like. When I was eight my dad got a job at the UN and we moved to New York and just like that, I was living in a fantasy world.
It was surreal and it set me on a path of thinking anything’s possible. After that, every year when we would travel back to Russia to see family, we would stop off for a few days in Paris, London,  Amsterdam, Athens. Much like toilet paper, travel was a luxury I was not meant to have and then I did and it made it very precious to me.
GGG: Recently you’ve been spending some quality time in your home country. What are the things you find missing most about your adopted country while you’re there, and what are you happy to be back to?
I miss American politeness. Russians typically do not say thank you, excuse me or even hello outside of their families. On my last full day there, I was in the grocery store and just ramming my cart into someone to let them know I wanted to get past them until I realized what I was doing.
In the US or pretty much anywhere else in the world, I would just say “Excuse me” but in Russia it was totally socially acceptable for me to injure someone instead. I love Russia, despite having to apologize for it constantly.
I love the way the air smells in the fall, that a grocery store has a separate mayonnaise aisle, adore the wooden houses with blue shutters right by my apartment, the Russian version of “The Voice” and of course my family. My grandmother still lives in the apartment I grew up in across the street from the kindergarten I went to, so I really get to go back to my childhood. 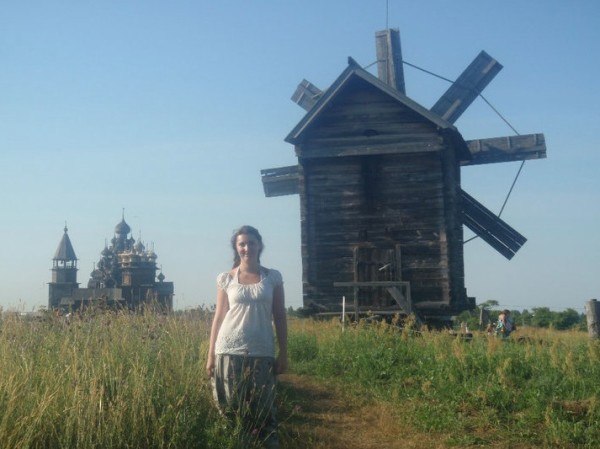 GGG: Your goal is to spend a year walking pilgrimages in all corners of the world. What was your inspiration for this trek?
The short answer is that the month I spent on the Camino was so incredible that when I came back I thought “That felt amazing, I want to feel that way all the time!” This sort of mentality is why I stay away from drugs.
The longer answer is that on the Camino I realized that we really are all in the same boat, with the same fears and the same needs and the same potential for compassion and love and if we understood that about ourselves, maybe we would stop hurting each other so much.
Some people try to further that message through nonprofit work, through policy or art or music but for some reason it feels most natural to me to do it by walking around the world. I am inviting anyone who wants to walk with me for a day, a week, or a month to reach out to me. Rather than being a solo adventure, this project is really about bringing to light the connections between all of us.
GGG: You have already walked the Camino de Santiago in Spain; what were some of the surprises you learned along the way?
I really learned that freedom is when your happiness is independent of your circumstances. Every day I woke up with three concerns- food, water and lodging. That’s it. What I ate, who I ate it with, what I looked like, none of it mattered. I even had to sleep outdoors a couple of times because the hostels were full but all I remember is how beautiful it was under the stars and not any frustration or fear that you’d expect when you don’t have a roof over your head.
I also learned never to buy cheese from an unrefrigerated caravan in the Pyrenees. Worst food poisoning I’ve ever experienced and in the mountains, no less!
GGG: Recently on Unlikely Pilgrim you shared a recipe for a Russian cake you’ve come to depend on during your time in Petrozavodsk. Are there any other foods you’ve come upon on your travels that you absolutely fell in love with? Any that you loved enough to get the recipe for and make once you got home?
So glad you asked! If you are ever in Cambodia, you have to order the traditional Amok curry. Served over rice with either fish or chicken it is top five of the best things I’ve ever eaten.
The flavor is really unique and unlike any of the other Asian curries I’ve tried. it’s  a combination of lemongrass, galangal, chili, kefir lime leaves, tumeric and coconut milk. I learned to make it at a cooking class in Sihanoukville using the instructor’s mother’s recipe and have made it at home quite a bit using the same recipe.

GGG: You’re a co-director of the Women’s Travel Fest, along with Go! Girl Guides founder, Kelly Lewis, and Mickela Mallozzi, who we’ll be hearing from on Girls That Go, too! How did that idea all come up and why did you ladies decide to make it happen?

I think a lot of traveling women are aware of the disproportionate amount of men who are traveling, writing about it, talking about, etc, and personally it is disappointing.
Women are still expected to stay home or to travel but only until their uterus tells them it’s time to make babies. There are so many hurdles for a girl who is itching for adventure that go beyond what men with the same dreams have to face, mostly socially.
While talking about how tired we are of answering questions about offspring and husbands I think Kelly and Mickela and I realized that women need a safe place to be themselves, to talk excitedly about Paris or Asia or the Amazon instead of fielding questions about relationships and careers.
The Women’s Travel Fest is especially important for  women who are just nursing the idea of travel and need to see that it’s okay, that there are so many of us who are doing it and we are so happy.
GGG: What are you looking forward to most about the Women’s Travel Fest?

I am so excited to be a part of this movement and I am really looking forward to seeing the connections that are made. We have the most diverse group of speakers talking about every aspect of travel from planning your first trip, to sex, to the ultimate year around the world and they’re all just such lovely, approachable women!

I have a feeling that this day will be the catalyst for a lot of friendships and traveling duos! I can’t wait, I think this might be one of the best things I’ve ever been a part of and as a woman and a traveler I am so glad that this outlet now exists.

GGG: What’s up next for you, Unlikely Pilgrim?
I had told myself I would stop traveling while I plan out my year of pilgrimages and get ready for the Women’s Travel Fest, but I just spent five weeks in Russia and I am going to Mexico in a couple of weeks and debating Costa Rica and Amsterdam for January. I just can’t stay put!
Thanks, Masha! We can’t wait to see where you end up in your journey! For more from Masha, see her website, An Unlikely Pilgrim, connect with her on Facebook or tweet with her!
And don’t forget to register for the first ever Women’s Travel Festival in New York City on March 8, 2014! Earlybird registration sales end November 30!
All photos are courtesy of Masha Vapnitchnaia.
Share. Twitter Facebook Google+ Pinterest LinkedIn Tumblr Email