Trending
You are at:Home»Girls That Go»Girls that Go! -An Interview with Cailin O’Neil
By Sara Button updated on June 3, 2019 Girls That Go, Rad Female Travelers

For this week’s Girls that Go! we chatted with Cailin O’Neil, of TravelYourself. Cailin is an intrepid travel blogger who epitomizes the spirit of a fun-loving female traveler. Check out her thoughts on food, tips for video blogging and her favorite train ride!

GGG: First off, what’s your background? When did you start traveling?

I grew up with my mother working in the airline industry, so I was on my first plane within a couple months of being born, actually. However, I didn’t get bit by the travel bug really hard until 2006 when I first went to Europe (France) and I have been trying to travel as much as possible since then.

I’m a Canadian east coaster, born and raised in Halifax and I majored in Film in University, hence the copious amounts of travel videos and the whole backstory for www.TravelYourself.ca.

GGG: Preparing a video blog must be different from regular blogging. What’s your process like?

I often explain it like this: the typical person can write the average 300-word blog post in 30 minutes to an hour. To make a 2-minute travel video I on average film anywhere from 1 hour to 2 hours of footage (depending on the type of video).

And keep in mind that this isn’t consistent shooting, this is footage collected over a few days of traveling and then you need to edit it. For a 2 or 3 minute video it can take around 8 hours for me to edit.

So it takes way longer and then on top of that I have to write a blog post to go with it and it can often be discouraging because it is such a big task at hand. However, my love for doing it keeps me going (most times, haha).

GGG: Well, it seems like time well spent! Do you have any special tips for people wanting to start video blogging their travels?

Don’t force it, let it come naturally and be happy on camera. Also, make sure that when filming yourself you over exaggerate your feelings, that way they come across better, bigger and you don’t appear dull and monotone to the viewer. Big smiles, no mumbling and know your facts.

GGG: Good advice! So, food plays a big role in your traveling, and you recently started The Taste of Travel. What’s your most memorable dining experience while traveling?

That is like asking me where my favourite place to visit is! That’s a tough one. Recently I’ve been going on a lot of food tours, I did one in Seattle and in New York and they were both fabulous. However, as cliche as it sounds, one of my most memorable meals while traveling was when I was in Italy in 2007 and I had this pizza that was so amazing, hot and fresh out of the oven, I’m drooling just thinking about it.

Hmmm…but when I was in Spain in 2009 on the day of La Tomatina, after the food fight a little old Spanish man invited me and two friends into his home for a meal and it was made from fresh vegetables from his garden….that was great, too. I could keep going. 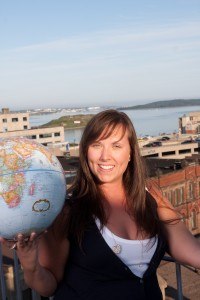 GGG: Sounds delicious! Okay, just for fun, time for some fill in the blanks!

Anywhere on a beach with friends and a drink in my hand.

Hákarl – fermented shark in Iceland. It wasn’t a meal but it was a taste that I voluntarily took and I gagged 3 times just trying to get it down.

As much as I do love saying “dos cervezas por favor,” I think I am going to have to go with “ejafjallajökull” which is the name of the glacier/volcano that erupted in Iceland in 2010, causing lots of havoc on the world. That one is a tongue twister. You can see my various attempts at saying it along with me eating the fermented shark in my Iceland video.

The best ground transportation experience I’ve had was in _________

Actually, just this past week while in Australia I took the 3 day, 2 night train called “The Ghan” all the way from Adelaide in South Australia to Darwin in the Northern Territory and it was one of the most spectacular ground transportation trips I’ve ever taken.

I had my own room / bed / toilet / shower and was fed gourmet meals each day and I met some truly wonderful people. I will also always remember my first ever Contiki tour through 8 countries in Europe in 2007 where I made some amazing friends for life.

Thanks so much for answering our questions, Cailin! To read–and see!–more about Cailin’s travels, check out TravelYourself, The Taste of Travel, follower her on Twitter or find her on Facebook.