Trending
You are at:Home»Girls That Go»Girls That Go! – An Interview with Val Bromann of Choosing Figs
By Sara Button updated on December 2, 2014 Girls That Go, Rad Female Travelers

This week we caught up with Val Bromann, the voice behind Choosing Figs. Check out her take on transitioning from long-term travel to a return home, what it’s like to try competitive eating, and more, in this week’s Girls That Go!

GGG: Hello! Kick us off with the basics–who are you, where are you from originally and how did you get started traveling? 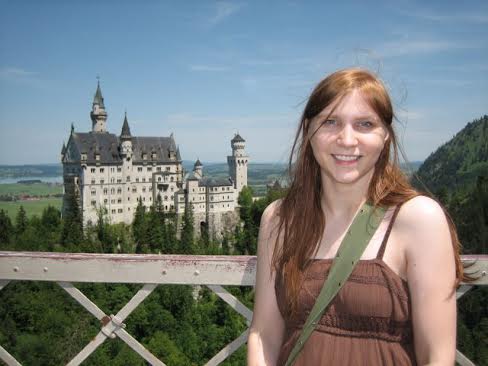 I’m Val Bromann from Chicago, Illinois, and of the blog Choosing Figs.

I didn’t grow up traveling. The only vacations my family ever took were to Disney World and Disney Land when I was too young to remember them. I was 18 the first time I got on a plane and didn’t take another one for almost five years.  I was 25 when I got my first passport. An ex boyfriend had told me that I needed to get a life. And he was very much right. I was working a high-stress/low-pay job, living with my parents, and watching a lot of reality TV. So when a friend was asking around for people to join him on a three-week backpacking trip around Europe, I decided to apply for a passport and go. On that trip I first started hearing about people taking a year off to travel the world and I thought: “I could never do that,” and, “I would never want to do that!” But over the years, as I started traveling more, as I fell more and more in love with travel, the idea kept popping into my head. I started thinking, “I want to do that.” And, eventually, I started thinking, “I can do that.”  So, when I turned 30 I bought a one-way ticket to Europe, and what was supposed to be a nine to twelve month trip, turned into three years of travel.
GGG: We love the title of your blog. Can you tell us a bit more about how you came up with it? If you had to retitle it, what do you think it would be?Choosing Figs is based on a passage from Sylvia Plath’s The Bell Jar. Basically a woman is imagining herself sitting under a fig tree, with each fig representing a different life choice: a husband and home, traveling the world, the perfect job, etc. She can’t decide which life she wants most so instead of choosing, she does nothing, and each fig withers and dies.
That was my life in my 20s. I wanted to buy a condo. I wanted to travel around the world. I wanted to fall in love. Instead I was bored at work and living with my parents for way too long. I couldn’t decide what I wanted to do so I did nothing. Now I am committed to going after the things I want in life, to choosing those figs.
You want me to retitle my blog? I started blogging in 2006 and just used my name for seven years (don’t read my oldest posts – they were mostly about who I wanted to win American Idol). In that time I came up with a lot of different titles, but for one reason or another I couldn’t commit. It wasn’t until 2013 when I was re-reading The Bell Jar that I came up with Choosing Figs and immediately knew that was it.I did at first think of using “Neurotic as Hell,” which is another quote from the book which captures a similar idea. So I guess if I had to retitle, I’d switch to that.
GGG: You recently returned to your job after traveling for quite a stint. How has that transition been?
Overwhelming! I arrived home from my last destination, Greece, on a Monday night and started back at work on Tuesday morning, so I didn’t give myself any time to adjust. I spent the first two weeks home passing out watching Netflix at 9:30 every night. I’ve now been home for almost a month and am starting to get back in the swing of things. I’m still apartment hunting, getting caught up on some neglected freelance work, and trying to update my blog, so it will be a while until I feel on top of anything again.
GGG: You like odd roadside attractions. Any particularly unique ones for first-timers hitting the road?
Road trips are my favorite way to explore the US and every time I take one I make way too many stops for roadside attractions. I have a particular affinity for anything that’s titled “world’s largest,” such as the world’s largest catsup bottle in Illinois, the world’s largest rocking chair in Missouri, or the world’s largest chest of drawers in North Carolina. That type of roadside attraction is great for first timers. They’re usually close to a highway for a quick stop and make for really fun photos!
GGG: I loved reading about how you were a groupie for competitive eating, and ended up managing to compete in the world famous Nathan’s Hot Dog Eating Contest! What first drew you to competitive eating, and is that something you’ve seen abroad on your travels? 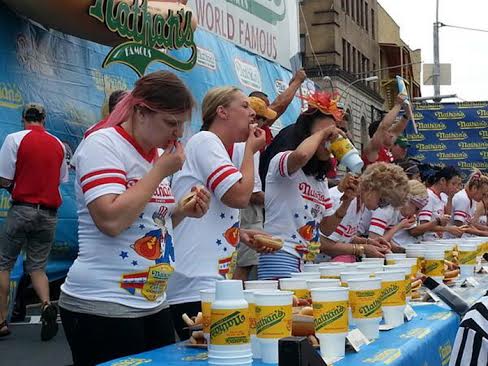 I started watching competitive eating on TV: every year on the Fourth of July I’d watch the Nathan’s Famous Hot Dog Eating Contest on ESPN. It was a competition I could get behind, as I was never into traditional sports, but love food. Competitive eating gave me something to root for that didn’t involve a ball. One day I found out that there was a jalapeno-eating contest in Chicago so I went to see it live and I became immediately hooked. It was fun to watch and just disgusting enough to make for some good photos. I started going to more and more contests, traveling all over the country to watch competitors eat massive amounts of food: from calamari to hamburgers to ice cream. I became friends with many of the eaters and even was lucky enough to watch two wonton eating contests while I was in Thailand.
I’d seen the Nathan’s Famous Hot Dog Eating Contest live four times and always wanted to compete, so this year I made it my mission to be up on the big stage. In order to compete on July 4 you have to be the top male or female eater at one of several qualifying rounds. I entered a qualifier in Tunica, Mississippi and won…by default, because I was the only woman there. But I made it! I ended up coming in last place on the Fourth of July, but I didn’t care – I got to fulfill a huge dream and the experience was amazing!
GGG: Your blog is very raw and honest. How do you think your writing affects the way you travel and see the world? (Or does it?)
I do strive to be honest in my writing and write (and live) from more of an emotional perspective over factual. So, sometimes embarrassingly, I can’t tell you much information about a place I’ve been, but I can tell you how it felt to be there. I’m probably too open on my blog, I’ll talk about everything I go through while traveling. So sometimes I tell myself that if I can’t blog about it, I can’t do it (though there are a few stories I’ve left out…)
GGG: Rapid-fire: Favorite place to drink a milkshake? Margie’s in Chicago. Best country for hot chocolate? France (because of Angelina). Most boring place you’ve visited? Utila, Honduras (because I don’t dive and there’s nothing to do if you don’t dive). Most picturesque overland ride you’ve taken? Driving through the Central Highlands of Vietnam.

GGG: What other adventures can we look forward to in the near future on Choosing Figs?

I’m not going to be traveling too much in the near future (though I do plan to take advantage of my whopping three weeks of vacation time). Instead I’ll be focusing more on personal development: just because I’m at home doesn’t mean my life has to be boring! I’m signed up for a metalsmithing class (to learn jewelry making) and, in the new year, plan to take guitar and salsa lessons. I’m also apartment hunting, so hopefully soon I’ll be able to blog about that (I’m too excited about decorating). And, I’ll hopefully date. A lot.

So I’ll still have plenty of adventures to write about, just of a different kind.

Sounds good! Thanks for chatting with us, Val! To read about Val’s adventures, check out her blog, tweet with her or find her on Facebook!

All photos in this post courtesy of Val Bromann.