Trending
You are at:Home»Girls That Go»Girls That Go: An Interview with Sally of Unbrave Girl
By Casey Siemasko updated on April 30, 2018 Girls That Go, Rad Female Travelers

This week’s awesome female traveler is Sally from Unbrave Girl. Though Sally says she’s afraid of everything from monkey attacks to monster trucks, this hasn’t kept her from years of traveling the world and living abroad. Apart from being an inspiration to fellow scaredy cats, she’s also one of the funniest travel bloggers around!

Read on for Sally’s travel advice to fellow unbrave souls,  her “No-Body Snark Diet and Challenge”, and much, much more!

GGG: Hi Sally! Who are you, where are you from, and how did you get started traveling?

I’m a writer, teacher, traveler, photographer and eater of many things. I’m also a big fat scaredy cat. I’m afraid of everything from ceiling fans to high heels. Hence the name of my blog.

I grew up near Buffalo, NY, and recently moved back there after almost six years of living in Asia.

I first started traveling in college. My freshman roommate and I didn’t want to go home for the summer, so we decided we’d each come up with a cool plan to go somewhere exotic for the summer to work; then we’d pick the best plan and go with it. My plan was to work at an amusement park in Ohio (yes, to me this was VERY exotic). My roommate’s plan was to get student work visas and go to London for the summer. My roommate’s plan won – partly because it was a much better plan and partly because she was really, really pushy.

At the time I didn’t have a passport and had never traveled outside of the country besides daytrips to Canada. I was completely and absolutely terrified and was convinced we’d end up destitute on the streets of London. Luckily, everything worked out – we got an apartment, found jobs and had an awesome summer. After that, I was hooked. I spent two more summers working abroad on student visas – one summer in Scotland, another in Ireland. And then after I graduated, I moved to Japan to teach English for a year. I’ve been working and living overseas off and on ever since.

GGG: Let’s talk more about your tagline: encouraging scaredy cats since 2009. You say you are scared of everything, but that doesn’t stop you from exploring the world! What’s your biggest piece of advice to other unbrave girls with brave aspirations?

Find a pushy friend! It definitely worked for me! I never, ever would have gone overseas if it wasn’t for that roommate. This is also how I ended up running races. I had never been athletic growing up, I absolutely hated gym class, and the whole idea of doing any kind of physical competition freaked me out. But when I moved back to Japan about seven years ago, I started hanging out with runner friends and they basically forced me to sign up for a 5K. By the time I left Japan, I’d run at least a dozen different races – including two half-marathons and one full marathon. I never, EVER in a million years would have done that if my friends hadn’t pushed me into it.

Your pushy friend doesn’t even have to go with you on whatever adventure it is you want to do but are too scared of doing – just find someone who’s willing to bug you until you get so sick of hearing them bug you that you just do it already.

GGG: I love your “No-Body Snark Diet and Full-Length Photo Challenge”. It is hugely inspiring for all women, traveling or not! Can you briefly tell our readers a little bit more about the article you wrote and challenges you gave?

Well, I’ve always been a big girl. And, while I’d like to think I’m honest about my size on my blog, I realized that the times I did mention my body on my blog, I was always saying something snarky about it. I hardly ever talked about the parts of my body that I liked, instead I was always making fun of my man-calves or my lack of upper arm strength.

I finally decided that this behavior wasn’t fair. My body had done a lot of really awesome things for me – from climbing Mount Fuji to completing a 10K on top of The Great Wall of China. And here I was treating it like a total jerk.

So I wrote the post, and I challenged both myself and my readers to stop being snarky about our bodies and to start posting full-length photos of ourselves on our blogs. Or if people didn’t have blogs, I told them they could send me their photos and I’d post them on my Facebook page.

The response was overwhelming. It was also kind of heartbreaking. I got so many comments and emails and photos and blog posts from people who were so incredibly beautiful. These were people I never, ever would have thought would have body issues. It really made me realize how we should all start seeing ourselves the way that others see us and stop listening to that snarky, jerky voice in our heads.

GGG: You’ve spent a lot of your travels teaching in China and Japan. Did you always aspire to teaching? Would you recommend teaching ESL as a way to fund traveling?

I never, ever thought I’d be a teacher growing up. I wasn’t particularly fond of kids, and I’m not particularly patient. When I went to Japan after I graduated, I just saw teaching as an easy way to get a work visa. I enjoyed my year there, but came back to the States in search of a “real job.” After a few years of working that “real job,” I decided real jobs weren’t quite what they’re cracked up to be, so I went to Brazil for a year to teach. I was primarily teaching adults in Brazil, and I really liked that, so after I returned home from Brazil, I decided to pursue my Master’s in Education in TESOL, so I could teach at the college level. I then taught college courses in Japan and China, and I’m now teaching at a university here in the States.

I would definitely recommend teaching ESL for people who are interested in living and working overseas. Even if you’re like me and you don’t think you’d like teaching, I suggest trying it out. There are just so many different jobs out there – from teaching pre-K to private tutoring with adult students – there’s probably going to be something that you like.

That being said, I wouldn’t say teaching ESL is for everyone. I’ve met people who haven’t enjoyed it and, as a result, have been unhappy teachers – this is really not fair to the students. So do your research first, ask people who’ve taught ESL before, maybe even do some volunteering or take a TESOL course. And, of course, check out these two posts I wrote about teaching ESL overseas (here and here) before signing up for a job. 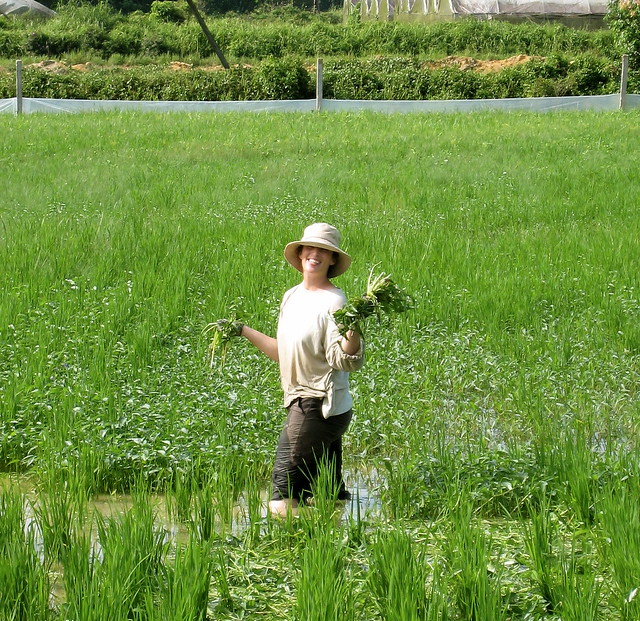 GGG: After a year traveling and volunteering around Southeast Asia, I’m sure you racked up plenty of ridiculous stories. What was the most hilarious thing that happened to you while traveling?

Probably when I went to Tioman Island in Malaysia for a beach holiday after volunteering on an organic rice farm for two months. And then the rice farmer I was working with decided to show up on the island and join me. I definitely got a lot of weird looks as I’m pretty sure I was the only white girl on the island hanging out with a sixty-year-old, Chinese-Malaysian rice farmer. But, honestly, it was a lot of fun.

GGG: Too funny! As you mentioned, you’re currently back in New York. What do you miss most about living in Asia? What don’t you miss?

I miss the street food, for sure. There’s just nothing quite like getting your dinner from a man who’s making crepe sandwiches using a propane tank bungee-corded to his bicycle.

I don’t miss the lack of cheese. Seriously, you guys, Asia is great, but I spent my entire time feeling seriously cheese-deprived. This is not a fun feeling.

GGG: What will we see from Unbrave Girl in the near future?

Sorry, can’t tell ya. I’d like to pretend this is because I have a super awesome plan up my sleeve. But I don’t.

Seriously, you guys, I have no idea.

All I know is that, hopefully, there will be lots of cheese involved.

Thanks so much Sally, and good luck with the cheese!

To read more about Sally and her adventures (as well as her affection for cookies and her couch), be sure to check out her blog Unbrave Girl.  You can also find Sally on facebook and twitter.

Casey Siemasko is a freelance writer, blogger, and avid traveler. She finds her life inspiration by exploring new places and meeting new people, and seeks to find magic in the most ordinary of places. When she's off the computer, she enjoys practicing yoga, training for marathons and scuba diving. Somewhere in there she also found time to write an eBook, 101 Tips to Living in Taiwan. She and her husband comprise the two lovebirds and digital nomads documenting their travel musings at http://acruisingcouple.com.