Trending
You are at:Home»Central America»Rites of Passage: The journey to Little Corn Island
By Ruby Tuesday updated on July 5, 2014 Central America, Nicaragua 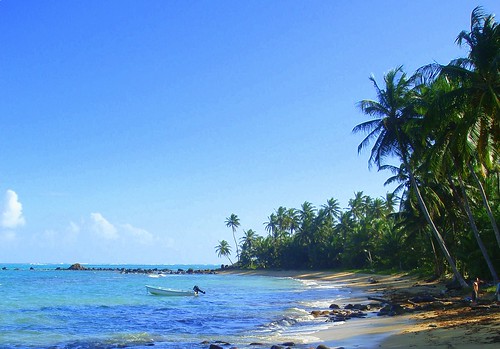 Every traveler experiences frustrating and difficult situations with transportation abroad: buses break down, boats run late, and weather or Sunday’s diminished schedule can ruin everything.

When there are multiple modes of transportation necessary for one journey, our traveler skills become thoroughly tested. If one single thing goes wrong, it can cause a domino effect and rapidly change your entire journey. Because of this, certain journeys become rites of passage as only true hard core veteran vagabonds would test their patience with these.

One treacherous rite of passage journey I’ve experienced was to Little Corn Island, a tiny Caribbean island off the coast of Nicaragua. It’s associated with Big Corn Island and while most tourists flock to this convenient getaway equip with an airport, it’s the smaller, more distant island that calls to the backpacking community.

As soon as I began my backpacking adventure  in Central America 6 months prior, I heard non-stop rumors of the gorgeous, relatively preserved Corn Islands.

It’s possible to fly from Managua to Big Corn for a “small” roundtrip fee of $180 and takes a mere hour. Then there’s the famous overland journey.

Traveling from Rama, the problem is scheduling. If you caught the buses and boats pretty much back to back (which is possible once a week and what I did), it still takes two treacherous days of traveling to make it there; and that’s banking on nothing breaking down and the weather being perfect. Only a few ferries a week make the main five hour journey from the coast to Big Corn. If you’re up for the arduous journey, you’re best not doing it alone. Although I did; it was my rite of passage.

I left Isla Ometepe around 10 am and it would take me 2 taxis, 1 boat, and 1 bus journey before I even reached Managua to wait for the 9 pm overnight bus. I’m generally a fan of night buses as it saves on accommodation and I’ve somehow trained my body to sleep awkwardly upright. But this slightly updated chicken bus was all but comfortable. The driver decided since he had to be awake, everyone else should be as well. He blasted terrible music, had all the windows open with a constant chilled wind, and took each curve of the road at ludicrous tire screeching speeds causing me to fly out of my seat every two minutes. It was impossible to acquire any sleep before we arrived at 4 am in Rama to wait for the first panga (a redimentary tiny wooden plank boat) to Bluefields.

This was a critical stop as the first panga leaves (theoretically) at 5:30 AM and therafter only when full with 20 passengers throughout the day. It was a particularly wet night and morning and so the small boats held off from leaving until a little after 7. Somehow I managed to get myself in the last group to leave of the surprisingly high number of passengers. While the other boats took off immediately, I was left behind with a German couple confused as to how all the locals in our group smuggled their way into the tiny boats. No matter, the rain was still coming down with a vengeance and I amusedly observed the squeezing of obviously too many people in the rickety boats without shelter. They were given a giant tarp and told to cover themselves as a group and I could only imagine the smell and humidity of near 30 Nicaraguans and backpackers huddled under a tarp.

Yet I was still left behind and finding the situation slightly less humorous. The once a week ferry from Bluefields (where the panga was headed) was slated to leave at 9 am and even if it ran a little late, we would still be arriving after it left. Somehow the German couple and I convinced them to put us and a few other locals in the mail boat and we piled in with lots of packages and flew down the river by 8 am, due to arrive 40 minutes after the ferry’s scheduled departure. All we could due was wait and hope that they were on Latin time, which means inevitably late.

I closed my eyes and covered my entire head with a scarf as the rain continued to beat down and stick needles all over my face. It would have been an incredible view and adventure down river if only I wasn’t completely wet and cold or have a numb butt from not being able to move a single muscle on the wretched wooden plank dubbed a seat. Luckily I had slipped my iPod into my pocket and The Rolling Stones saved an otherwise miserable hour and a half.

Suddenly the panga slowed and we looked around confused as we were nowhere but still in the middle of the river. “There be the ferry to Corn Islands there,” our driver said in his thick Mosquito accent pointing to a large boat headed our direction. We were too late. But then he started waving his arms and signaling to the ferry captain that he had 3 passengers to Corn Islands and asked if they could take us. There were maybe 70 other passengers staring down at us as we pleaded with our sad eyes and prayer hands to take us along. And they did.

Suddenly our bags were being tossed up and inside the ferry and I was shrieking with laughter and excitement as this ridiculously lucky situation unfolded. I had no desire to wait in Bluefields for a day or so to await cargo ships to pass through and see if they were willing to take me aboard. Once on board I immediately recognized other travelers and we caught up on our adventures. But by the time the ferry made it out to sea I had to retire myself to the back, less bumpy section.

I get seasick pretty easily so I usually take sleeping pills for boat trips, but didn’t this time for some stupid reason. There wasn’t enough fresh air to save my churning stomach and eventually I gave in and hurled out everything I had for breakfast. A Spanish backpacker took pity on me and offered some seasickness medicine that helped to put me out of misery. Seats were few and far between but there’s always room for the sad, sick girl who vomited off the back of the boat.

I was overwhelmed with joy when we reached Big Corn Island six hours later, even though the journey was not yet done. We had about an hour to kill before another panga left for Little Corn. Despite the lack of rain, this short 30 minute boat ride was the wettest part of my day. Practically flying across the water, the people in the front go up and down but stay dry while the back was calmer but wetter. I went to the back immediately and used the ineffective tarp to cover my head.

By this point I had been traveling for over 30 hours near non-stop and was in much need of sleep and solid ground. So perhaps it was pure delirium but I couldn’t stop laughing as we bounced over the water towards my final sanctuary; we were so close I could taste it (literally as the super salty water kept going in my giggling mouth).

As we disembarked my legs were shaky, my stomach gurgled, and I couldn’t have been happier while admiring this picturesque island at sunset. There were white sand beaches, a few drop-off cliffs, and only a small paved path that lead from one end almost to the other. I would love to tell you how magical this island is: how lovely the locals are, the nonexistent cars and motos, and how you can discover the entire circumference in under a couple of hours. There are even several isolated beaches to tan your naked bum in peace. But that’s not the point of this article. Little Corn is obviously amazing, but sometimes the journey is the destination.

Ruby Tuesday was just an ordinary girl from suburban California until she studied abroad in the random and entertaining island of Malta. After that, she decided to explore every corner of the world in search of extraordinary adventures. Suddenly she was climbing cliffs in Thailand, befriending monkeys in Bolivia, and practicing the ancient martial art of sunmudo in Korea. Her unquenchable thirst for exploring new communities, fantastic heights, and hidden corners all over the world can only be matched by her procrastination and laziness. She lingers nearly everywhere she goes, soaking in as much culture and fun as possible. The only thing that makes her happier than traveling was sharing her experiences with others and offering advice. And so she wrote.