Trending
You are at:Home»Europe»5 Historic Sights in Berlin You Shouldn’t Miss
By Katie Marpe updated on May 10, 2018 Europe, Germany

When thinking about the top cities for a European vacation, one’s mind commonly jumps to romantic Paris, lively London, and beautiful Rome (or never-ending pasta Rome, depending on your priorities). But a tourist spot commonly overlooked is Berlin, Germany.

For three centuries Berlin has been the center of some of the most powerful empires in Europe: the Kingdom of Prussia, the German Empire, the Weimar Republic and Hitler’s Third Reich.

Even until 20 years ago Berlin was the subject of discussion and controversy around the world; mirroring the state of Germany as a whole, Berlin was sliced down the middle and separated into Soviet-ruled East Berlin and Allied Powers-ruled West Berlin.

If you are a seasoned traveler, a history buff, or a new traveler to Berlin, there are a number of must-see sights to give you a taste of Germany’s rich history:

The Brandenburg gate is the only gate left standing out of the 18 gates once used to enter the city in the 1700 and 1800s. Originally built as a symbol of peace in the Kingdom of Prussia, the gate was ironically incorporated into the Berlin Wall during the Cold War. However, in 2000, former East and West Germany repaired the wall of its severe World War II damages and it is now a symbol of the German reunification. 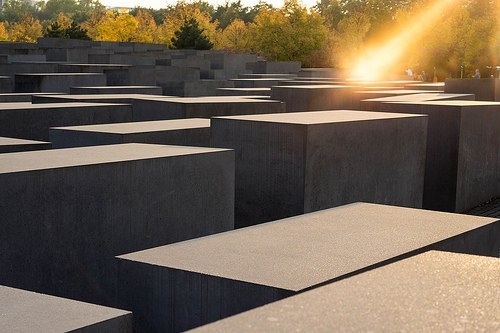 The sculpture consists of over 2,000 concrete slabs on uneven pavement, so when walking through them, you can see the whole sculpture one second and they will be towering over your head the next.

The designer Peter Eisenman wanted each visitor to walk through it and take from it a personal interpretation of its meaning, so when walking around the memorial you will not find a sign explaining its significance. Underneath the memorial is a moving museum displaying personal stories of Holocaust victims.

There aren’t many places where the Berlin Wall is still standing (though where it once stood is marked by a double brick line in the ground throughout the city). Not only is East Side Gallery the longest stretch of the Berlin Wall still standing, but it is also the longest open-air gallery in the world. In the 1990s, artists from around the world were invited to decorate this portion of the wall, which now stands as a memorial for freedom. 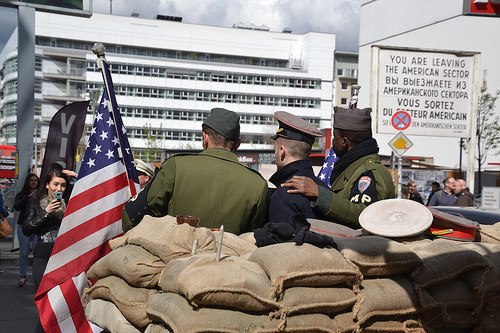 This small military building was the crossing point between East and West Berlin during the Cold War.

In the early 1960s, the U.S.S.R. demanded that all allied forces (U.S., U.K., and France) leave West Germany, which, long story short, led to a stand off between 10 U.S. and 10 Soviet tanks with Checkpoint Charlie in the middle.

After an agreement between John F. Kennedy and Nikita Khrushchev, the tanks backed away; it is said that without this agreement, the incident at Checkpoint Charlie could have led to World War III.

Yes, I am telling you to visit a parking lot of an apartment complex. But it is not just a parking lot; it is the parking lot where Hitler’s bunker once stood and the site of his famous suicide.

Go with a guided tour to this location or read about it in a guidebook first, or else this will be just a parking lot to you. However, whether you learned about WWII in high school world history, have read every piece of WWII literature in publication, or have any knowledge of this mustached-man I call Hitler, it is worth it just to stand in a place that has so much history – even if it is just a parking lot.

I recommend taking a guided tour of Berlin when you visit; I know you don’t want to look like a tourist, but there is so much to learn about the city, you are just going to have to sacrifice your pride for three hours. (I always recommend the Sandeman New Europe Tours; they are free and awesome).

And, if you get tired of all this history, stop by a currywurst stand or Lowenbrau for some German beer and a pretzel. Berlin was one of those places that I visited not knowing what to expect and left feeling like I could stay there forever and still not see everything the city had to offer.

Have you ever been to any of these historic sites in Berlin?

Katie is a Southern California native who just got back from studying in Canterbury, England. Her three months traveling Europe were the best three months of her life, and now she is back home in California with a travel bug and a dwindling bank account. Katie is a movie buff, bookworm, and coffee addict, and when you meet her try not to bring up traveling or she won't stop talking your ear off.