Trending
You are at:Home»Inspiration»5 Places to Find Inspiration in Edinburgh, Scotland
By Kae Lani on May 11, 2016 Inspiration, Europe, Scotland

What do Robert Burns, Sir Walter Scott, and J. K. Rowling all have in common? They are all famous writers who sought their fame in Edinburgh, Scotland. Their stories engage us, and their words are poetic. I’ve often wondered how they came up with such wonderful ideas, but it wasn’t until I visited Edinburgh, Scotland that I found the holy grail of intellectual stimulation, and I too became inspired.

Edinburgh is full of inspiring landscapes, thought provoking architecture, and legends that will get your creative juices flowing.  It’s no wonder that so many great artists as well as thinkers throughout time came from Edinburgh or found Edinburgh to be their muse. If you’re a writer trying to find the right words or just on the quest to be inspired, check out these places in Edinburgh!

This is the infamous café where J. K. Rowling sat by a window and jotted her ideas down about a young boy wizard and his friends saving the world from evildoers. It was here that Rowling wrote the first two Harry Potter books, the beginning of a series that became a global phenomenon. I got the rare opportunity to eat a meal while sitting in her seat and I can see where she got much of her inspiration for the world of Harry Potter.

In one glimpse out of her window, you can see the Edinburgh castle on the cliff that overlooks the city, and below, an old graveyard with rusty gates and mossy tombs. The interior has an eclectic mix of furniture and art, and a menu to feed your inspiration. No matter what tale you wish to weave here, you’ll find plenty of material to work off of.

Not only is this graveyard an aesthetically pleasing and mysterious destination, but every square inch of it is covered in local legends and lore. Stories of ghosts and poltergeists run rampant through the cemetery, making Greyfriars Kirk a great location to manifest ideas of creepy stories, or even brilliant sketches of old trees and tombstones.

But not all is spooky at Greyfriars Kirk. There is one heartfelt legend that comes out of this graveyard and that is of Greyfriars Bobby. Made famous by Disney, Greyfriars Bobby is the legend of groundskeeper and his loyal dog. After the groundskeeper had passed away, the dog was said to have watched over his master’s grave. Because the dog did not leave his master’s side, everyone in town would bring the dog food, toys, and water. Today, a statue of Bobby sits just outside the gates of the graveyard.

An elegant palace situated at the end of the Royal Mile. Holyroodhouse remains an active palace of the royal family, where events, deliberations and other gatherings are still held today. It is a mix of the royal family’s artifacts and present day modern conveniences. If you’re inspired by history and politics, then taking a walk with an audio tour through the palace is for you.  You’ll get your creative juices flowing with stories of royal drama of events that occurred in their private quarters, while reliving their thoughts and the decisions that were made that have changed the world we live in today.

A close in Edinburgh is a narrow alleyway and Scotland is riddled with them. But the most well known close in Edinburgh is the Lady Stair’s Close, home to the Scottish writer’s museum. Shuffle through the close and you are transported to a 17th century courtyard, surrounded by old mismatched townhomes of varying heights. 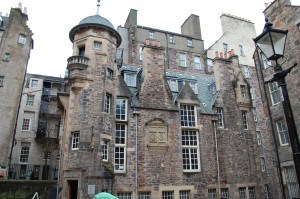 There’s nothing more stunning than visiting castles! Built high above the cliff overlooking the city is the Edinburgh Castle, a fortress constructed during the 12th century. With many different buildings inside the castle walls, there’s a lot offered to get your ideas flowing. One entrance fee not only lets tourists see the castle, but gives visitors admittance to several museums of Scottish history as well as Scotland’s Stone of Destiny. Standing outside, looking down at the picturesque views of Edinburgh, you can imagine the pivotal events this castle has seen.

If you’re planning your own trip, the Caledonian Backpackers Hostel offers amazing accommodations for affordable prices. Not only is it a nice place to rest your weary head, but you will most likely find a group of fellow artists staying there as well. The Caledonian attracts a multifaceted crowd of artists ranging from writers to painters and even musicians. The common area provides tons of entertainment and easy ways to meet new people and exchange ideas. Play pool, grab a beer, or play the Wii while meeting neat and interesting people from all over the world.

Kae Lani Kennedy is a Philadelphia-based photographer and journalist obsessed with food and travel. She's also the Social Media Director of Matador Network and host of broadcasts on Foodful Thinking. When she's not exploring the world through food, she's piloting drones, studying market bubbles, and being a modern day Anthropologist.