Trending
You are at:Home»Europe»A Beginner’s Guide to the Edinburgh Fringe Festival
By Leah Eades on January 18, 2016 Europe, Scotland

For three weeks every August, the Scottish city of Edinburgh is overrun by the Edinburgh Fringe – the world’s largest arts festival. Actors, performers and comedians from across the globe put on shows all day, every day. For many, there is no better time to pay this beautiful city a visit.

That said, the rewards of making the pilgrimage to Edinburgh to witness the wonder that is the Fringe do not come without a price. For the entire month the city is filled to breaking point with hordes of tourists, as well as all the inflated prices, fights for accommodation and crowds that go with them.

Even without the crowds, the Fringe can be overwhelming. Take a walk down the Royal Mile and you’ll be bombarded with leaflets from people in their underpants, comics with desperation in their eyes and the occasional fire-breather on stilts. Add to that a programme so packed that it requires military precision to put together an itinerary for your trip, and with shows of all sorts running from early in the morning until long past midnight, and it’s a miracle that anyone manages to see anything at all before giving up and going home dazed and confused.

As an Edinburgh Fringe veteran, let me offer you my tips for making your Fringe experience fantastic: 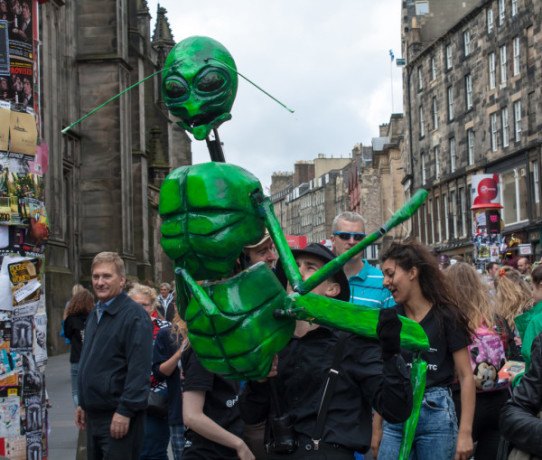 Accommodation in August in Edinburgh is in high demand. Remember that you’re not just competing with other tourists, but also the 21,000 or so performers, directors, stage hands and promoters who flock to the city in droves. You cannot book your Fringe accommodation too far in advance, so accept now that you will have to pay more than you would like, and get looking. Also be warned that the spare rooms and sofas of local residents are like gold dust at this time of year – so start buttering up any friends you might have in the area sooner rather than later.

Summer in Scotland is a fickle beast. It may be glorious. It may be pissing it down. Bring a coat and brolly with you at all times just in case, and above all do not forget a pair of sturdy boots. Edinburgh was, after all, “built on Seven Hills” ­– and trust me, your knees will definitely know it after a day spent scooting from venue to venue. If you have mobility issues, you may want to invest £3.50 in an all-day bus ticket – visit www.lothianbuses.com for more information.

The Fringe has shows to suit every taste and budget, from the ‘Free Fringe’ (which consists mainly of student and amateur productions) to big names with the price tags to match. Check out what’s on and read some reviews in advance to identify any potential must-sees. Not only do many of the most popular, well-known events sell out in advance, but you’ll also need an idea of which shows you can’t afford to miss so that once you’ve got your hands on a programme you can begin the tricky process of planning exactly how you’re going to fit in everything you want to see into just x-many days. Which brings us on to my next point…

Give yourself time to wander

Although it can be tempting to try to fit seven shows into each day’s activities ­– “But they all look so good!” – rushing from venue to venue with no room for pause is no way to spend your time. Not only will it devalue the entire experience as all of the shows will simply end up blurring into one, but you will never – and I mean never – be able to see everything that you would like to see; it is simply not physically possible. To give you some idea of the scope: in 2011 there were 2,542 shows (607 of which were free) spread over 258 venues, with an average of 1,360 performances a day spanning theatre, comedy, dance, cabaret, children’s shows, musicals, operas, spoken word and more.

Instead, choose just one or two highlights for each day and give yourself space to breathe, reflect and explore. One of the greatest joys of the Fringe is being able to walk down the street and encounter something quite unexpected and fantastic (I recommend the smartphone app, which has a ‘What’s near right now?’ feature, should you find yourself with an hour or so to spare), or being given a recommendation for something you never would have heard of otherwise. Make sure you allow time for the unplanned.

Go beyond the Fringe

Although the Fringe is amazing, there is much more to Edinburgh than just that. I won’t go into all the different activities and sights that the city has to offer – I’ll let the tourist office speak for itself – but they range from taking tea in the café Harry Potter was penned in to seeing the sights from atop Arthur’s Seat, with plenty more in between.

Of course, from there you can always go further afield. Glasgow is only a couple of hours away, and if you head north it won’t be long until the hit the Highlands… but that’s another post entirely!

Do you have any Fringe Festival tips? Let us know.