Trending
You are at:Home»Europe»Celebrating St Patrick’s Day in Dublin
By Leah Eades on November 10, 2015 Europe, Ireland

Celebrating St Patrick’s Day in Dublin is on a lot of people’s bucket lists – and it’s not hard to see why. The city’s annual St Patrick’s Festival is a four-day celebration of Irish arts and culture culminating in the famous St Patrick’s Day Parade, which regularly attracts 500,000 spectators. And last year, I was one of them.

I was actually there by accident – a friend and myself had booked spontaneous last-minute flights to Dublin without thinking about the date, and only realised it was the St Patrick’s Festival that weekend when we went to book a hostel and found that everything was three times the expected price and unavailable.

I may have ended up in Dublin for St Patrick’s Day by sheer chance, but it’s a mistake I was pretty pleased with. There’s so much to do and see, and there’s an amazing buzz in the air. Of course the downside includes elevated prices, competition for accommodation and hoards of tourists as far as the eye can see – but overall, I’d say it was more than worth it.

The 2015 St Patrick’s Festival will take place 14-17th March, meaning that you’ve still got a month to make your travel plans! But what can you expect if you head to Dublin for the St Patrick’s weekend? Here’s just a taste of what’s on offer:

The Festival kicks off with a free treasure hunt that sets treasure hunters off on a trail that takes in many of Dublin’s most famous landmarks and venues. Get yourself into a team of four, and get ready to sleuth!

Watch Dublin’s two rival universities – University College Dublin and Trinity College – battle it out in a 2km rowing race down the Liffey.

I Love My City

Explore Dublin by night during the St Patrick’s Festival and you’ll quickly notice a lot of its popular landmarks have taken on a distinctive green quality… it’s pretty atmospheric, not to mention a great photo opportunity.

Get Your Céilí On

It isn’t St Patrick’s Festival without a Céilí. You don’t have to know what you’re doing – just follow the lead and join in the fun at this massive outdoor celebration of traditional Irish dance on the iconic St Stephen’s Green. If you want to really splash out (or just would rather be indoors) you can also buy tickets for Céilí House Live at the National Concert Hall.

Coinciding with the St Patrick’s Festival, the annual Irish Beer & Whiskey Festival includes tastings, masterclasses and traditional live music. Entry costs €10, which includes a free half pint as well as a souvenir glass. 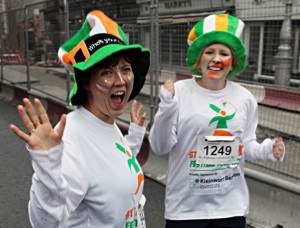 I signed up myself and my (somewhat reluctant) friend for this race last year, and would highly recommend it – as I’ve said before, races can be a really fun way to see a new place. The St Patrick’s Festival 5km is a nice event that the racers don’t take too seriously (translation: you can walk a lot of it and not feel embarrassed), people cheer you on, and you even get a souvenir shirt at the end. Plus you can treat yourself to a pub lunch and Guinness afterwards knowing it’s been truly well earned!

After three days of build-up, the Festival goes out with a bang on St Patrick’s Day itself, the highlight of which is the St Patrick’s Parade. Each year sees leading Irish and international street theatre and pageant companies celebrating a different theme – 2015 is dedicated to the best of Ireland today. Get there early to secure a spot within sight of the parade (especially if you’re short!) and bring some snacks – last year the parade was pretty late starting.

Happy St Patrick’s Day! Will you be celebrating in Ireland?