Trending
You are at:Home»Europe»Croatia»An Insider’s Guide to Diocletian’s Palace in Split, Croatia
By Kelly on April 10, 2019 Croatia

The city of Split is home to the palace of Emperor Diocletian, or the Diocetian’s Palace.

It’s one of the most popular and most preserved Roman buildings in the world — a palace that’s more of a complex than a palace alone.

Visiting the palace is one of the best things to do in Split. All of its four parts are unique, and walking down the two main streets transports you through history.

From the four military towers cornering the complex, to the monumental porch, or the awe-inspiring architecture, here’s a bit more about what you can expect to see in Diocletian’s Palace. 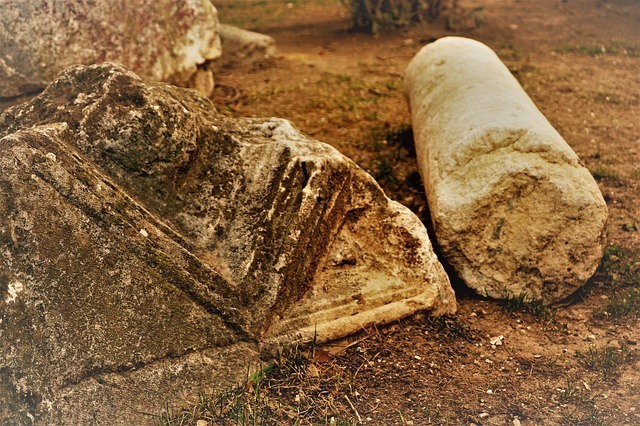 The cathedral in the palace complex was originally the mausoleum of Emperor Diocletian, known for being a fierce persecutor of Christians. Because of this, his burial ground is now a beautiful Cathedral dedicated to two martyrs – Saint Domnius and Saint Anastasius.

The saints were executed in the nearby Solin, so this cathedral was constructed in the 7th Century in their honor and remembrance. The cathedral still functions to this very day as a place of liturgy, and you can also visit it for Sunday mass.

The original name of the gate was Porta Septemtrionalis, and the reason we know it today as the Golden Gate is due to Venetian influence in the 16th century.

Though the name changed to Porta Aurea, its importance has remained the same. This gate led directly to Salona, the then provincial capital of Dalmatia, and it was only used by Diocletian himself and his closest family and advisors.

The Golden Gate is uniquely decorated, and is a true sight to behold. It was also an important defensive point of the palace. 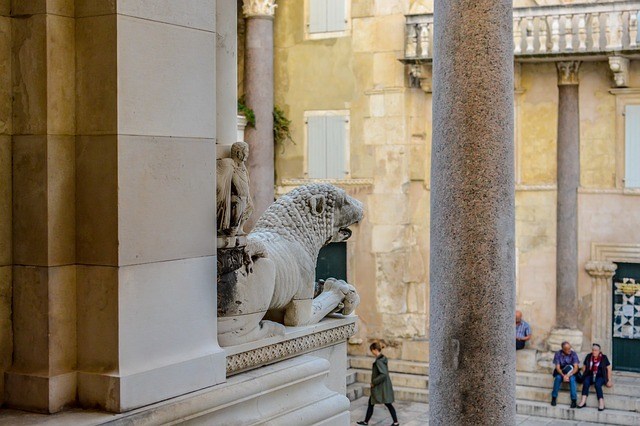 While not as high-class and lavish as the Golden Gate, Porta Orientalis is just as important but for different reasons.

This was the entry point for the common folk, which led directly into the main street from the east side leading all the way to the west side.

The gates are mostly fully intact, and were shut down in the middle ages and reconstructed in the Baroque period.

It was through these gates that Pope John Paul II passed through in the year 2000, and created an important event for all Christian Catholics of the region.

The vestibule was used to enter the residential part of the palace. It’s a fascinatingly unique piece of architecture, with its semicircular niches with statues and a cupola with gorgeous mosaics.

People used to live in the vestibule up until half a century ago. The last early Romanesque house that stands there is attached directly to the vestibule.

Today, it’s one of the most popular hotels in Split, and it’s aptly named Vestibule.

In this part of the palace complex, you’ll also find the former church of Saint Andrew and the Ethnographic Museum as well as the site of the Imperial chambers.

Sadly, they haven’t been preserved, but a faithful replica is in place where you can easily visualize what the chambers used to look like. 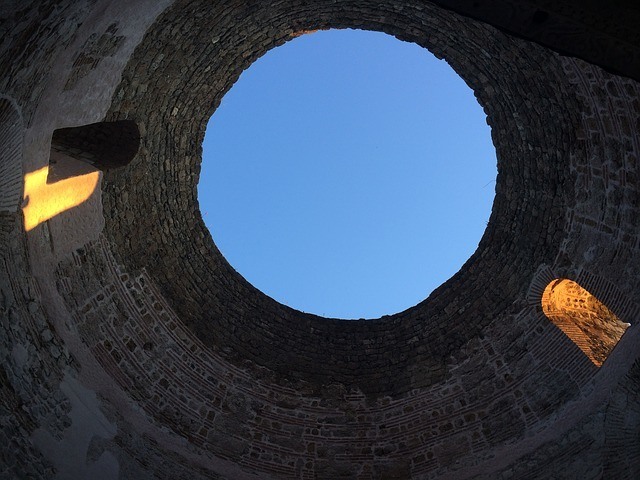 This is the central square of Diocletian’s Palace, and it was dedicated to Emperor Diocletian himself who was thought to be the personification of Jupiter, the chief of gods in the Roman pantheon.

Today, this is a vibrant part of the palace, with an exceptional urban feel to it.

It’s surrounded by gothic and renaissance architecture from the surrounding palaces–don’t miss having a cup of coffee in this square to take it all in.

While the substructures have a unique modern importance, they used to be incredibly important in the past because they used to elevate the imperial chambers.

The emperor used to live directly above these substructures, and they were the place where the palace would keep its stocks.

This part of the palace was used as a residential spot back in the Middle Ages but it fell to ruin. It was excavated in the 19th century, and partially opened for the public in 1995.

Today, it hosts regular art exhibits, plays, unique fairs, and social and artistic events. The Substructures are the main reason why the historical core of Split was appointed a UNESCO World Heritage Site.

The entirety of this palace complex is one fascinating spot to visit. It’s an important social and artistic hub of the city, and it’s well worth the visit on your next trip to Split.

Have you been to the palace, or to Split, Croatia?