Trending
You are at:Home»Europe»History and Hiking in Cyprus
By Kelly on September 4, 2015 Europe, Cyprus

There’s nothing like going solo to give you the ultimate freedom to travel exactly how you want to. It means I can indulge in two of my passions without the rest of the family moaning about how much longer we’re going to have to – and I’m quoting here – look at these old relics or go for a walk for no reason. You can also bring a dog to your adventure if you want a non-human companion. However, not all dogs are suitable for this kind of activity. To know what dog breeds are best for hiking, check out this great article: https://www.latestpaws.com/best-backpacking-dog-breeds/.

And, there can be few better places for travelling as a woman alone than the birthplace of one of the strongest women in Greek mythology – Aphrodite. She may be the goddess of love and romance, but she’s also the goddess of beauty.

I’ve chosen my accommodation because it’s on Tombs of the Kings Road, right between two of the world’s most beautiful historic attractions.

So, my first stop is just a few minutes’ away. The Paphos Archeological Park houses stunning mosaics dating back to Roman times that are still remarkably vibrant, and intact. And, not only are they magnificent pieces of art, but every single one of them has a fascinating back story.

My favourite is the mosaic which shows the tale of Pyramus and Thisbe, which is believed to have inspired Shakespeare’s Romeo and Juliet. The two are lovers who planned to meet in the forest. But, when Thisbe arrived first, she fled in fear after spotting a tiger in the trees.

Pyrus arrives and sees the scarf she left behind, covered in blood because the big cat had just killed some prey. Thinking his love is dead, he falls upon his own sword. When Thisbe returns to look for him, she finds her dead lover and kills herself in the same way.

Another shows the story of Phaedra and Hippolytos, a tragic tale of a stepmother’s love for her stepson. Phaedra declares her love for Hippolytos but lies to her husband Theseus and says his son was in fact infatuated with her. Theseus prays to the sea god Poseidon to take revenge and Hippolytos is killed by a wild bull.

It’s no wonder that the park is part of a UNESCO World Heritage Site. And, just a mile up the road, back past my hotel, is another significant attraction, the Tombs of the Kings. The name is slightly misleading as the tombs are thought to have been built as the burial place of Paphitic aristocracy rather than royalty, but they are no less stunning for that. 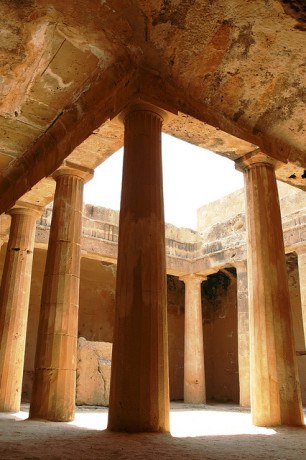 They’re open until 7.30pm in the summer season, so I visit late to miss the heat of the afternoon. As you descend the steep uneven steps leading down into the burial chambers, with the setting sun casting long shadows, you feel as if you’re in the middle of a movie set. I’ve visited Egypt’s Valley of the Kings, which was breathtaking. But the number of tourists there along with you does detract from the magic of the place. Here, it’s gloriously quiet, allowing you to soak up the serene atmosphere.

After a packed day, I’m ready for some rest and relaxation and spend the next few days doing not very much at all, except for catching up with a trashy novel on the golden sand at Coral Bay.

Before I go home though, I can’t pass up the opportunity to hike in Cyprus’ famous Troodos Mountains. So, as there’s no direct bus route, I find a local hire car company and head east.

I base myself in Platres with a company providing self-guided walks and head out for the Madari Ridge, a challenging 13km hike, along a well-marked route (thankfully because my sense of direction is a bit hit-and-miss), to Cyprus’ second highest peak, Mount Adelfoi.

Sitting at the top, under perfectly blue skies, having emerged from pine scented paths, there can be no better way to end my trip to Cyprus. Blessed with 360 degree views over the island, it’s clear to see why the gods and goddesses of days gone by made the island their home.

Have you ever been to Cyprus?

About the blogger: Katie is a UK based travel and food blogger who spent spring travelling round Cyprus and the Mediterranean. Now back home in Yorkshire she writes about her adventures in sunnier climes and her misadventures in the kitchen.