Trending
You are at:Home»Europe»Iceland»Chasing the Northern Lights
By Kelly on April 29, 2015 Iceland

The Northern Lights have to be one of the most spectacular sights on Earth.

Quite rightly, people from all over the world plan trips in the hope that they’ll catch a glimpse of this celestial display, and Iceland is one of the premier destinations for viewing this mesmerizing natural phenomenon.

If you’re keen to get in on the action though, you’ll need to time your vacation carefully. After all, this natural show can only be seen during certain times of the year and it’s unpredictable. To boost your chances of catching the Northern Lights in Iceland, take a look at this brief guide.

Know what you’re looking for

Before you even start thinking about booking a holiday, it’s important to get to grips with what this cosmic lightshow actually is. Also called the Aurora Borealis, the display is caused by the interaction of the steam of charged particles emitted by the sun (called the solar wind) and the Earth’s magnetic field. As some of these particles enter the atmosphere, they excite gases and make them glow. The resulting displays are most visible in the polar regions, including Iceland, Greenland, Siberia and parts of Norway, Canada and Alaska.

Guaranteed darkness is a must if you’re to see these lights in their full glory, so if you’re traveling to Iceland, make sure you arrive sometime between September and mid-April. Some experts recommend narrowing this window down further to the period between November and February because these are the very darkest months. However, bear in mind that the depths of winter also bring with them the worst weather, and snow and rain clouds can obscure your views of the skies.

Since these lights are so unpredictable and illusive, it’s savvy to prolong your stay for at least seven nights. This is because the aurora tend to be active for two to three nights before disappearing for four to five nights. If you were to arrive and leave within a few days, you could easily miss out. 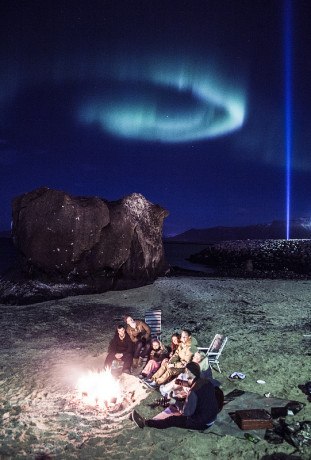 As well as timing your trip carefully, make sure you’re in a suitable spot to see the lights. This means getting away from bright cities and towns. You can choose from a range of tours that take you to good viewing destinations. There’s also the option of staying in hotels that offer wakeup services if the aurora appear.

Although you can never be guaranteed a glimpse of this lightshow, by planning your trip carefully, you stand a good chance of seeing them.

Images by jamarmstrong and stebbz, used under Creative Commons license