Trending
You are at:Home»Europe»France»5 Things to See While Visiting Paris
By Kelly on September 29, 2017 France

For many of us, a trip to Paris is a once-in-a-lifetime opportunity to explore and revel in the history and beauty of the heart of France. But Paris can also come with a lot of pressure, as so many things are considered “must-see” attractions.

To help you have a stress free vacation, here are the things you absolutely CANNOT miss. Everything else, plan for a second or third trip.

In addition to being the world’s largest art museum, the Louvre has the distinction of being the world’s most visited art museum. In 2016 over 7.3 million people visited the massive 12th century fortress. As a museum, it opened in 1793 and holds some of the world’s most beautiful art. Exhibits include more than 7,500 paintings including the Mona Lisa. Huge collections of Greek, Roman, Egyptian and Islamic art and cultural artifacts are massive draws for the public.

Completed in 1354, the Notre-Dame cathedral is an iconic example of French Gothic architecture and an active part of the Catholic Church. It includes a museum and a staggering amount of art, most integral to the cathedral. Facades and statues fill the interior while stained glass windows illuminate the artistry of their creators.

Anchored on one end by the Arc de Triomphe, the Avenue des Champs-Elysees is nearly two kilometers long and is known for its cafes, theaters and shopping. The avenue is the site of the annual Bastille Day parade and has become a popular celebration spot for nationally important events. 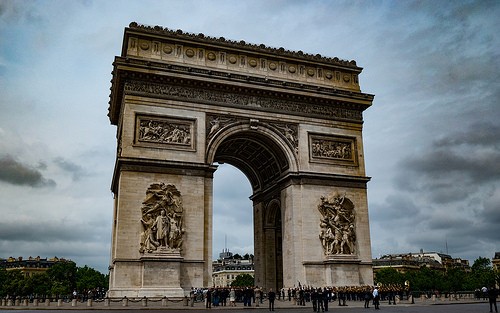 Commissioned in 1806 to celebrate Napoleon’s victory at Austerlitz, the Arc de Triomphe wasn’t completed until 1836. After his death on Saint Helena, the former emperor’s body passed under it enroute to his final resting place. The Arc is also the burial place of the Unknown Soldier and features an eternal flame.

The Basilica of the Sacred Heart of Paris, or Sacre-Coeur, is both a cultural and political monument recognizing the defeat of France in the Franco-Prussian War of 1870, the Paris Commune of 1871 and the return to conservative morals of the time. Begun in 1875, it took almost 40 years to complete and wasn’t consecrated until after the end of the First World War. Sacre-Coeur is an important religious site for Parisian Catholics.

Although not an exhaustive list (the Eiffel Tower wasn’t included after all) for travelers who want to get the most out of their visit, these sites are a good place to start. Paris is filled with art, history and monuments and picking and choosing the ones that you want to see should be a matter of personal choice.

When visiting Paris, travelers should strive to get a hotel that is central to downtown. Although more expensive than hotels outside of the city proper, they make it easy to soak up the spirit of Paris while remaining within walking or metro distance of the clear majority of the attractions.

Getting around Paris is easy. These sites can be accessed from either the metro or bus lines making it less expensive for budget tourists. For travelers who want more convenience, a taxi (in Paris relatively inexpensive) would be a great alternative to public transportation.

Have you been to Paris?