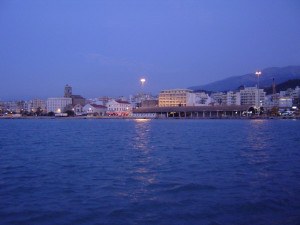 I spent a month in Greece when I was 19. I traveled all over the marvelous country and there are some things that I will never forget. Here we go:

1)   The Greek man on the bus. People in Athens on public transport are less than happy. I’m actually pretty positive that I never saw anyone smile…until the day we were heading to the beach. Public transportation in Athens was usually pretty crowded no matter what time of day it was. So when a group of us decided to head to the beach we couldn’t find standing room on the bus together. I was stuck next to an older woman who looked about as happy as Voldemort in HP Book 7 (he dies). The bus took a hard left turn and I lost my footing and went flying falling into Voldemort Jr. and she immediately began screaming at me in Greek. Obviously I had no idea what she was saying, but I had a pretty good idea. All the sudden my Greek God appeared from nowhere and started yelling back at her. After he was finished she moved to the back of the bus and he resumed his post, but this time he was right next to me. He then began speaking to me quickly while smiling and laughing. I just kind of stared at him before I finally told him I didn’t speak Greek. He said “Wow! I wouldn’t have guessed you weren’t Greek- your skin color is similar.” We got off on the same stop but he was going left and I was going right and I never saw him again. But I will always remember and be grateful for the single happy person on the bus that day that saved me from the final battle.

2)   The Hellenic Police or the popo of Athens– When we were Greece there was this law in place that anyone hired on by the government couldn’t be fired. I mean it seems cool I guess until you realized there’s 3 million cops staring at you while you walk to get your morning pear because they have nothing else to do because the other 3 million are patrolling. I will never forget how useless the police in Athens were to me. One night a friend and I got super lost on a back alley street. We couldn’t read the street signs or maps for the life of us and nothing about this area looked familiar. NO FEAR! We spotted some policemen. We asked them for help. They clearly understood us but decided to ignore us and make perverted jokes to one another. We eventually realized what was happening and ran away to seek sanctuary in mounds of gelato. Thanks for nothing.

3)   MY THIRST. Hey guys, you know how when you go on a hike up a side of a mountain and you become pretty thirsty? So you go to this restaurant later and can’t wait to drink gallons of water while eating some free bread? If you live in Greece, no you do not. Sure you can get some water at a restaurant but you have to pay for it by bottle and the bread is extra. I was dehydrated for 4 weeks straight because I’m cheap and wanted souvenirs more than water.

4)   One is the loneliest number. While in Greece, I was lucky enough to be able to travel to the island of Santorini which is famous for its beautiful white buildings and amazing beaches and of course- the sunsets. Santorini is so beautiful I cannot even put it into words. I’m struggling so hard right now. But being in Santorini as a single woman or man is like going out to dinner on Valentine’s Day alone. There were two types of people visiting Santorini when I was there: locals and honeymooners. Then there was me…watching the sunset alone… crying into my nutella gelato.

5)   Club Q. One night we decided to venture out to a club. We arrived before 10 p.m. and you would have thought it wasn’t even open yet. It was us and this 12-year-old kid hanging out. (Yeah, there’s no drinking age.) We requested music and they played 13 Rihanna songs and we danced while the locals gathered around to stare at us. We then left by midnight when people were just starting to show up. I can’t handle that kind of life, Greece. You’re too hip for me.

6)   A legitimate Greek gyro. Good God. The beauty. The luscious taste of roasted lamb and tzatziki with crisp seasoned French fries in my mouth. All for just two euros. If I ever have to request a last meal, this will be it. I’m not going to be able to sleep for weeks now after describing this to you. Don’t settle for those state fair gyros. Just don’t do it. You deserve better.

7)   Greek Yogurt. You know what Greek yogurt actually is? Sour cream. I’m pretty positive there’s no difference. I was so excited to order my first Greek breakfast of Greek yogurt and fresh fruit. I took a huge bite then immediately regretted my decision. I didn’t even have a substantial amount of water to wash it down (see above.) If you’re super into sour cream, Greek yogurt is perfect for you. Otherwise make sure it is SMOTHERED in honey or just don’t even attempt it…not worth it.

8)   Showering. I don’t like to make assumptions here but I’m going to ahead and assume that the Greek culture isn’t too big on showering. I mean they shower and all, but there’s no way they could enjoy it. For the shower I had to use you first had to make sure the breaker was off as to not be electrocuted. Then you jump into this “shower” and realize the showerhead is halfway down your back. I’m 5’9 okay, Greece? I’m not a giant. Then you spend 30 seconds making sure your hair is completely wet and suddenly the water turns below freezing. Then you cry and give up and wash off using the sink.

9)   Pickpocketing. I was lucky enough to not be pickpocketed while in Greece…but I witnessed it happening so many times. It’s not like you can even do anything about it. One second there’s this adorable toddler running around on the street and next thing you know he’s running away with your wallet. Sneaky little things. Unfortunately this kind of behavior speaks volumes for the economic state of Greece.

10)  Following my intuition. One night a group of us girls decided to go out on the town. We dressed up, wore heels, put on some makeup…you know, the works. We were walking around the streets in Athens struggling more than usual because WALKING IN HEELS IS HARD when all the sudden these two women latched us onto us. We hadn’t even noticed them prior to this point but as soon as one of us said something about America they pounced. They told us they were flight attendants in town for the night and they wanted to party. First of all, they were like 45. Which is fine, I’m not against having a good time when you’re 45 but by this time it was close to midnight and they were more excited than us in our mid twenties. So we were a little sketched out but we went with them. They started to lead us down this side street and before we knew it we were nowhere near city life and it was growing darker and shadier. I started to have this really bad feeling. I, being the self-destructive person that I am, read up on sex trafficking before traveling to Greece. Of course I had read ONE thing that had mentioned how they will sometimes use women to lure other women in because we tend to trust women more. So here we are walking down this abandoned side street and I start to panic. For some reason I was positive that there were people waiting at the end with chloroform rags waiting to take us away. As soon as these thoughts started entering my mind a black cat ran out in front of us and we all screamed. I took the opportunity and told my friends we were running for it. I left my shoes on the side of the street and took off. I could have been completely paranoid and overdramatic but I would much rather be safe than sorry. I think it’s important to always listen to your intuition because sometimes it knows best.

ELLO. My name is Lara Parker. I'm a 22 year old recent college graduate with a serious case of wanderlust. I lived in Australia and Greece and will be moving to London in 2014 for grad school. I'm part Lebanese and I'm terrified of wasting my life. You can find my personal blog at www.laraeparker.com ... come along with me on my adventures because not all those who wander are lost